The Legal Observer
by Veronica Pamoukaghlian Viera, May 18, 2019 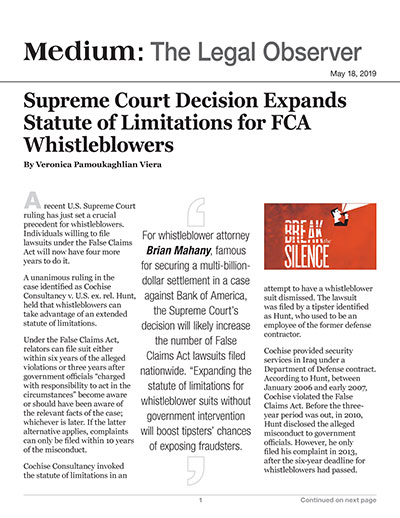 A recent U.S. Supreme Court ruling has just set a crucial precedent for whistleblowers. Individuals willing to file lawsuits under the False Claims Act will now have four more years to do it.

A unanimous ruling in the case identified as Cochise Consultancy v. U.S. ex. rel. Hunt, held that whistleblowers can take advantage of an extended statute of limitations.

Under the False Claims Act, relators can file suit either within six years of the alleged violations or three years after government officials “charged with responsibility to act in the circumstances” become aware or should have been aware of the relevant facts of the case; whichever is later. If the latter alternative applies, complaints can only be filed within 10 years of the misconduct.

Cochise Consultancy invoked the statute of limitations in an attempt to have a whistleblower suit dismissed. The lawsuit was filed by a tipster identified as Hunt, who used to be an employee of the former defense contractor.

Cochise provided security services in Iraq under a Department of Defense contract. According to Hunt, between January 2006 and early 2007, Cochise violated the False Claims Act. Before the three-year period was out, in 2010, Hunt disclosed the alleged misconduct to government officials. However, he only filed his complaint in 2013, after the six-year deadline for whistleblowers had passed.

The government declined to join Hunt’s lawsuit against Cochise. In order to prevent his complaint from being dismissed, Hunt claimed that it had been filed within three years of the government learning the relevant facts. But his argument did not convince the district court, which held that the government-knowledge statute of limitations did not apply to suits where the government had not intervened, and if it did, it applied to the moment when the whistleblower learnt of the misconduct, rather than when the government did.

Hunt successfully appealed, and the Eleventh Circuit reversed the ruling, stating that the three-year statute of limitations applied, even if the government had not intervened, and that the timing of the whistleblower’s knowledge was not what the False Claims Act provision referred to, in any case.

Cochise applied to the Supreme Court, which affirmed the Eleventh Circuit’s opinion. Before this important ruling, courts frequently denied whistleblowers the right to sue when more than six years had passed since the misconduct occurred in cases where the government had not intervened.

For whistleblower attorney Brian Mahany, famous for securing a multi-billion-dollar settlement in a case against Bank of America, the Supreme Court’s decision will likely increase the number of False Claims Act lawsuits filed nationwide. “Expanding the statute of limitations for whistleblower suits without government intervention will boost tipsters’ chances of exposing fraudsters. Likewise, it will force companies to maintain records connected to claims submitted to the government longer. The government often declines to intervene in whistleblower lawsuits because it has limited resources. Lawsuits without government intervention can be more demanding on relators and their legal teams, but the whistleblower awards can be higher, and that is a great incentive to seek justice.”

“All in all, the Supreme Court ruling is excellent news for taxpayers. It will give new ammunition for courageous whistleblowers, who may not always be in a position to file suit within six years of an instance of misconduct, for a number of, often complex, reasons,” Mahany concluded.