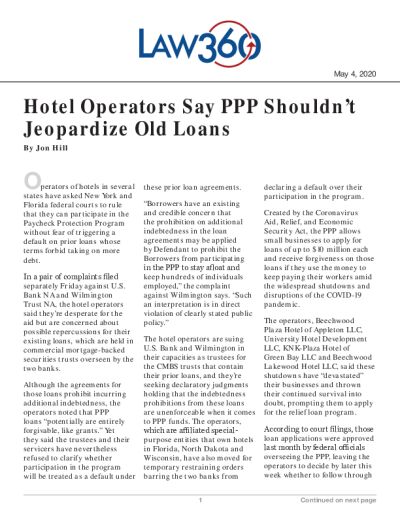 Operators of hotels in several states have asked New York and Florida federal courts to rule that they can participate in the Paycheck Protection Program without fear of triggering a default on prior loans whose terms forbid taking on more debt.

In a pair of complaints filed separately Friday against U.S. Bank NA and Wilmington Trust NA, the hotel operators said they're desperate for the aid but are concerned about possible repercussions for their existing loans, which are held in commercial mortgage-backed securities trusts that the two banks serve as trustees for.

Although the agreements for those loans prohibit incurring additional indebtedness, the operators noted that PPP loans "potentially are entirely forgivable, like grants." Yet they said they have been unable to get confirmation on whether their participation in the program will be treated as a default under these prior loan agreements.

"Borrowers have an existing and credible concern that the prohibition on additional indebtedness in the loan agreements may be applied by Defendant to prohibit the Borrowers from participating in the PPP to stay afloat and keep hundreds of individuals employed," the complaint against Wilmington says. "Such an interpretation is in direct violation of clearly stated public policy."

The suits were filed against U.S. Bank and Wilmington in their capacities as CMBS trustees, though Wilmington told Law360 it's the trust servicers that are in charge of providing the consent sought by the hotel operators. Those servicers are Wells Fargo and Rialto Capital Advisors, neither of which is named as a defendant in either suit.

The operators, which are affiliated special-purpose entities that own hotels in Florida, North Dakota and Wisconsin, are seeking declaratory judgments holding that the indebtedness prohibitions from these loans are unenforceable when it comes to PPP funds. They have also moved for temporary restraining orders barring the two banks from declaring a default over their participation in the program.

Created by the Coronavirus Aid, Relief, and Economic Security Act, the PPP allows small businesses to apply for loans of up to $10 million each and receive forgiveness on those loans if they use the money to keep paying their workers amid the widespread shutdowns and disruptions of the COVID-19 pandemic.

The operators, Beechwood Plaza Hotel of Appleton LLC, University Hotel Development LLC, KNK-Plaza Hotel of Green Bay LLC and Beechwood Lakewood Hotel LLC, said these shutdowns have "devastated" their businesses and thrown their continued survival into doubt, prompting them to apply for the relief loan program.

According to court filings, those loan applications were approved last month by federal officials overseeing the PPP, leaving the operators to decide by later this week whether to follow through and take the funds. But while the operators said they would pursue full loan forgiveness if they accept the PPP money, they said they still have not received confirmation on how U.S. Bank and Wilmington would react to their participation in the program in light of the indebtedness restrictions on their prior loans.

That uncertainty comes despite "numerous requests for clarification" to the trust servicers, the operators said, and is a problem because a declaration of default could lead to "disastrous" consequences for them, including loss of their hotels to foreclosure and penalty interest rates and fees running into the hundreds of thousands of dollars.

"The opportunistic and improper behavior of Defendant amid the most significant economic crisis in a generation — and while government efforts to restore liquidity to markets are underway — must be stopped," the operators said in the complaints.

Counsel information for U.S. Bank and Wilmington was not immediately available.