R. Kelly judge slammed by members of legal community: ‘I want some of what she’s smoking’ 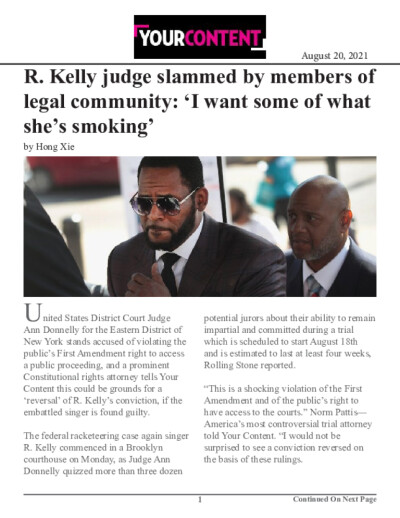 United States District Court Judge Ann Donnelly for the Eastern District of New York stands accused of violating the public’s First Amendment right to access a public proceeding, and a prominent Constitutional rights attorney tells Your Content this could be grounds for a ‘reversal’ of R. Kelly’s conviction, if the embattled singer is found guilty.

The federal racketeering case again singer R. Kelly commenced in a Brooklyn courthouse on Monday, as Judge Ann Donnelly quizzed more than three dozen potential jurors about their ability to remain impartial and committed during a trial which is scheduled to start August 18th and is estimated to last at least four weeks, Rolling Stone reported.

“This is a shocking violation of the First Amendment and of the public’s right to have access to the courts.” Norm Pattis—America’s most controversial trial attorney told Your Content. “I would not be surprised to see a conviction reversed on the basis of these rulings.

“I want some of what this judge is smoking.”

Your Content was first to report Friday that the federal judge barred the media from observing R. Kelly’s trial and banned the release of dissemination of evidence prosecutors intend to use for the public to inspect or view.

“It goes without saying that the weirdness of R. Kelly’s trial is compounded by the fact that the judge is not letting a single media member in the courtroom, has delayed release of evidence and today, agreed that evidence made PUBLIC in court couldn’t be released to the media” tweeted Victoria Bekiempis, a courtroom correspondent covering the R. Kelly trial. “So we are watching everything unfold on, I want to say, 54-inch TV screens in a media room, where most people in courtroom have heads the size of quarters or smaller, including witnesses.

Defense lawyers have countered by saying Kelly’s alleged victims were groupies who turned up at his shows and made it known they ‘were dying to be with him.’

The women only started accusing him of abuse years later when public sentiment shifted against him, they said.

Kelly is perhaps best known for his smash hit ‘I Believe I Can Fly,’ a 1996 song that became an inspirational anthem played at school graduations, weddings, advertisements and elsewhere.

An anonymous jury made up of seven men and five women have been sworn in to hear the case.

The trial, coming after several delays due mostly to the pandemic, will unfold under coronavirus precautions restricting the press and the public to overflow courtrooms with video feeds. If convicted, he could face life in prison.

The New York case is only part of the legal peril facing the singer, born Robert Sylvester Kelly. He also has pleaded not guilty to sex-related charges in Illinois and Minnesota.