Where Does the Term “Whistleblower” Come from, Anyway? 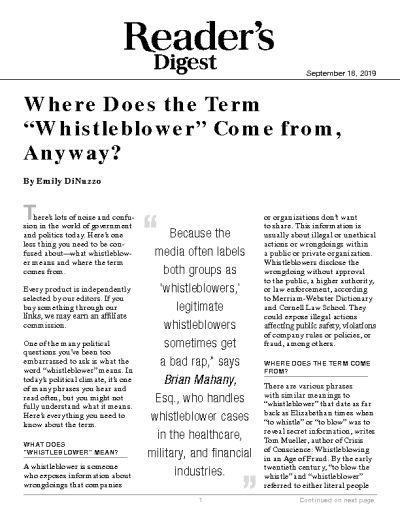 There's lots of noise and confusion in the world of government and politics today. Here's one less thing you need to be confused about—what whistleblower means and where the term comes from.

One of the many political questions you’ve been too embarrassed to ask is what the word “whistleblower” means. In today’s political climate, it’s one of many phrases you hear and read often, but you might not fully understand what it means. Here’s everything you need to know about the term.

What does “whistleblower” mean?

A whistleblower is someone who exposes information about wrongdoings that companies or organizations don’t want to share. This information is usually about illegal or unethical actions or wrongdoings within a public or private organization. Whistleblowers disclose the wrongdoing without approval to the public, a higher authority, or law enforcement, according to Merriam-Webster Dictionary and Cornell Law School. They could expose illegal actions affecting public safety, violations of company rules or policies, or fraud, among others.

Where does the term come from?

There are various phrases with similar meanings to “whistleblower” that date as far back as Elizabethan times when “to whistle” or “to blow” was to reveal secret information, writes Tom Mueller, author of Crisis of Conscience: Whistleblowing in an Age of Fraud. By the early twentieth century, “to blow the whistle” and “whistleblower” referred to either literal people blowing whistles, or people attempting to stop illegal or immoral activity by making a fuss, Mueller writes.

Another word for a whistleblower, “relator,” dates back to 1863 and the False Claims Act. Relators have evidence that a company is explicitly defrauding a federally sponsored program, explains Donald E. Petersen, a Florida trial attorney who represents whistleblowers in qui tam actions under the federal False Claims Act. State laws in America, on the other hand, are a bit more strange.

There are a few other explanations for the origin of the word, too. Law enforcement officials, such as British “Bobbies” in the United Kingdom, for example, used whistles to alert the public or fellow police of a crime, according to David Reischer, Esq., Attorney & CEO of LegalAdvice.com. All of these have a place in the phrase’s history, but how we use it today is thanks to Ralph Nader.

How do we use “whistleblower” today?

Ralph Nader helped re-coin the term “whistleblower” in a positive light, according to Mueller. The “Conference on Professional Responsibility” Nader held in Washington, D.C. in 1972, and the corresponding book, were game changers. Journalists preferred using this instead of “snitch,” which has a negative undertone. In the late 1960s and 1970s, a series of whistleblowers not only spread awareness on various issues, but they popularized the positive use of “whistleblowing.” And Petersen says the word “whistleblower” appears in Webster’s Dictionary in 1970 because of the reports and discussion of the Pentagon Papers. It’s one of the history lessons your teacher probably skipped.

What’s the difference between a whistleblower and a leaker?

There are some similarities between whistleblowers and leakers, Petersen says, but there are differences between the two. On a very basic level, both whistleblowers and leakers take or transfer information and secrets from an organization to people outside the organization, explains Jason Ross Arnold, PhD, Chair and Associate Professor for the Department of Political Science at Virginia Commonwealth University and author of Whistleblowers, Leakers, and Their Networks.

The main difference between the two is that whistleblowers release information that shows wrongdoing. They have a right and responsibility to report this information, Reischer says. Leakers, however, release sensitive or classified information unlawfully, and often to the press, possibly for their own personal or political agenda—not necessarily for public good or policy, Petersen and Reischer say.

Since some people wrongly think the words are entirely the same, there’s lots of miscommunication and confusion. “Because the media often labels both groups as ‘whistleblowers,’ legitimate whistleblowers sometimes get a bad rap,” says Brian Mahany, Esq., who handles whistleblower cases in the healthcare, military, and financial industries. “The intelligence community ‘whistleblower’ that claimed the president pressured Ukraine to investigate the son of a current U.S. presidential candidate has little in common with the healthcare worker who reports that certain physicians are performing unnecessary surgeries,” he adds. If you didn’t know the difference, you might also not know the answers to these history questions most people get wrong.

Can a whistleblower remain anonymous?

If someone blows the whistle on the private sector, there’s a greater chance their identities come out, Petersen says. “Whistleblowers often remain anonymous when they report misconduct to their employer’s internal reporting system,” Petersen says. “Far too often, employers’ compliance officers (or outside counsel) conduct biased investigations to clear the company of wrongdoing.” During the investigation, the whistleblower’s superiors attempt to identify them and, if successful, retaliate against them.

Another more common question people ask isn’t whether or not whistleblowers can remain anonymous, but rather if they should. It’s challenging to stay anonymous and expose illegal conduct at the same time because the public isn’t able to judge the whistleblower’s credibility, Petersen notes. Expecting people to identify themselves and attach themselves to their allegations holds them accountable and reduces the chances of fake, frivolous, or purely self-interested allegations, Arnold adds.