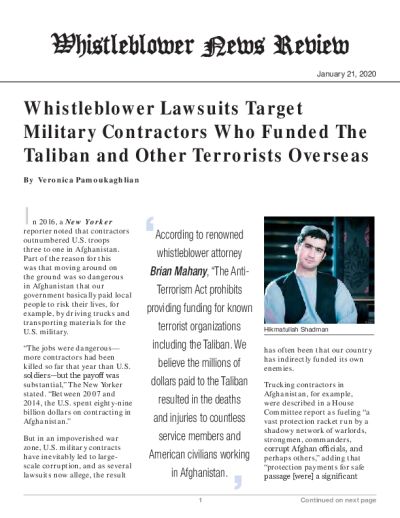 In 2016, a New Yorker reporter noted that contractors outnumbered U.S. troops three to one in Afghanistan. Part of the reason for this was that moving around on the ground was so dangerous in Afghanistan that our government basically paid local people to risk their lives, for example, by driving trucks and transporting materials for the U.S. military.

“The jobs were dangerous—more contractors had been killed so far that year than U.S. soldiers—but the payoff was substantial,” The New Yorker stated. “Between 2007 and 2014, the U.S. spent eighty-nine billion dollars on contracting in Afghanistan.”

But in an impoverished war zone, U.S. military contracts have inevitably led to large-scale corruption, and as several lawsuits now allege, the result has often been that our country has indirectly funded its own enemies.

Trucking contractors in Afghanistan, for example, were described in a House Committee report as fueling “a vast protection racket run by a shadowy network of warlords, strongmen, commanders, corrupt Afghan officials, and perhaps others,” adding that “protection payments for safe passage [were] a significant potential source of funding for the Taliban.”

This shocking state of things has not only been observed in Afghanistan. Several ongoing whistleblower lawsuits have exposed contractors with ties to terrorists in Iraq and Pakistan as well. Individuals with information about this type of misconduct can sue military contractors on behalf of the U.S. government thanks to the False Claims Act and the Anti-Terrorism Act.

According to renowned whistleblower attorney Brian Mahany, “The Anti-Terrorism Act prohibits providing funding for known terrorist organizations including the Taliban. We believe the millions of dollars paid to the Taliban resulted in the deaths and injuries to countless service members and American civilians working in Afghanistan.”

Mahany, who is involved in various investigations into anti-terrorist law violations and procurement fraud in Afghanistan and Iraq, has reported on a recent, large-scale lawsuit against various military contractors who allegedly funded Taliban operations.

On his blog Due Diligence, he asked an important question, “What is the purpose of sanctions designed at stopping the flow of money to terrorists if companies awarded multi-million dollar government contracts are quietly giving money to these very same terrorists?”

The False Claims Act allows private citizens to file a complaint against fraudsters on behalf of U.S. taxpayers. When a U.S. military contractor has violated the Antiterrorism and

Effective Death Penalty Act (“AEDPA”), any claims for payment they submit to the government constitute false claims and can be grounds for an FCA lawsuit.

Under AEDPA, it is illegal to provide material support to terrorist groups such as the Taliban. Defense contractors sometimes view protection payments made to terrorists and enemy forces as a cost of doing business in Iraq or Afghanistan. Yet engaging in this type of behavior can render all of their business with the U.S. government unlawful.

Material support in this context is defined by the law as “any property, tangible or intangible, or service, including currency or monetary instruments or financial securities, financial services, lodging, training, expert advice or assistance, safehouses, false documentation or identification, communications equipment, facilities, weapons, lethal substances, explosives, personnel (one or more individuals who may be or include oneself), and transportation, except medicine or religious materials.”

The Corrupt Contractors Financing the Taliban

A single Afghan man, Hikmatullah Shadman, made a hundred and sixty-seven million dollars from 2007 till 2012 by providing pricey logistics services to the U.S. military in Afghanistan. The government eventually sued Shadman, and reached a $25 million settlement in March 2019.

The allegations against Shadman and his companies included the “fraudulent receipt of a disproportionate number of subcontracts for the transport of military supplies in Afghanistan, as well as the inflated prices that he charged the United States for such transport.”

According to a DOJ press release, Shadman’s companies submitted thousands of false claims for payment to the United States. “As a result of this falsification, the Government often paid Shadman for work that was never performed,” the DOJ wrote. The government also alleged Shadman charged the U.S. inflated prices for his services, “well above the average rate of his competitors.”

Between 2007 and 2014, our government paid U.S. and international contractors $89 billion in Afghanistan. In 2009, a report by The Nation claimed trucking companies like Shadman’s were paying off the men who controlled the country’s roads, including the Taliban; in other words, funding the enemy.

After investigating the matter, Scott Lindsay, of the House Subcommittee on National Security and Foreign Affairs, reflected, “If you have to pay your enemy for the right to be there, something’s gone wrong.”

Lindsay was not the only official who wondered. The Special Inspector General for Afghanistan Reconstruction said he found it troubling that “the U.S. military can pursue, attack, and even kill terrorists and their supporters, but that some in the U.S. government believe we cannot prevent these same people from receiving a government contract.”

A government report released in 2010 revealed that, out of $31 billion paid to contractors in Afghanistan, about $360 million had ended up in the hands of corrupt officials, criminals, or the Taliban. In the case of Hikmatullah Shadman, investigators found that he had transferred funds to a notorious Taliban “money mover,” who had been linked to a suicide bomber attack.

“The American money was benefitting everybody—the government and the Taliban,” a local competitor of Shadman’s later told reporters.

In 2017, a lawsuit filed by 200 veterans and families of veterans killed during service alleged that several drug and medical device makers had engaged in illegal business dealings with terrorist groups in Iraq.

AstraZeneca, General Electric, Johnson & Johnson, Pfizer, and Roche Holding allegedly made business deals with the Iraqi Health Ministry in spite of knowing that it was affiliated with Shiite terrorist groups that targeted Americans.

According to the lawsuit, which is still pending, “Some U.S. government personnel in Iraq called Jaysh al-Mahdi ‘The Pill Army,’ because Sadr and his Jaysh al-Mahdi commanders were notorious for paying their terrorist fighters in diverted pharmaceuticals, rather than cash.”

A spokesperson for the plaintiffs said in a statement that “the defendants’ payments aided and abetted terrorism in Iraq by directly financing an Iran-backed, Hezbollah-trained militia that killed or injured thousands of Americans."

The drug and medical supply manufacturers allegedly “obtained lucrative contracts from [the Iraqi Health Ministry] by making corrupt payments to the terrorists who ran it.” The lawsuit further explained that “The terrorist-finance mechanism was straightforward: the terrorists openly controlled the Iraqi ministry in charge of importing medical goods.”

According to the complaint, the same terrorist groups were behind over “300 armed attacks,”  which were, ultimately, financed by the defendants. “While Americans worked to rebuild Iraq,” a spokesperson for the plaintiffs commented, “many were attacked by a terrorist group that we allege has been funded in part by the defendants’ corrupt sales practices.”

Over 186 veterans were allegedly killed or wounded in attacks directly funded by the drug and medical supply companies. Many of them were killed in suicide bomber attacks. Others were severely injured or disabled.

Ami Neiberger-Miller, a relative of one of the fatal victims, told reporters that what she cares about is “holding corporate actors accountable for their unethical and irresponsible behavior overseas that put valuable resources in the hands of terrorists who attacked and killed our troops.”

In December 2019, the families of 143 Americans who were killed or injured in Afghanistan filed a lawsuit alleging contractors had funded the Taliban by paying them for protection, thus contributing to the financing of attacks on American troops.

According to the complaint, contractors either hired Taliban guards directly or hired subcontractors who made payments to the Taliban. In other words, instead of investing in security, the contractors allegedly bribed the Taliban to refrain from launching attacks that could disrupt their services. As a direct consequence, the insurgents now had money to organize attacks on non-protected contractors and American troops.

From a dam to Afghanistan’s Ring Road, these companies were involved in many large-scale projects. Although the U.S. has been fighting the Taliban for 18 years, they seem stronger today than when the conflict began. It is easy to make the connection between this renewed strength and the unintended fate of U.S. development funding.

As early as 2009, Hillary Clinton, then Secretary of State, informed the Senate that the money paid by contractors for ‘protection’ was a key source of funding for Taliban militias. Ten years later, justice is barely on the horizon.

If this lawsuit succeeds, it will be the first time U.S. military contractors are held accountable for funneling cash to the Taliban. The amount of money in question appears to be significant. According to the complaint, 20 to 40% of the funds for large projects ended up in the pockets of the Taliban in exchange for protection.

A spokesperson for the plaintiffs told reporters that these protection payments “redirected attacks away from the defendants’ own interests while financing a terrorist insurgency that killed and injured thousands of Americans.”