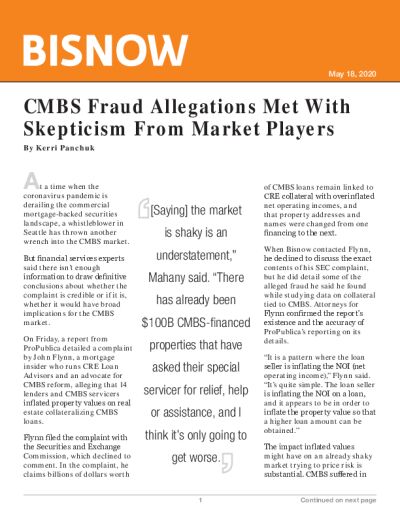 At a time when the coronavirus pandemic is derailing the commercial mortgage-backed securities landscape, a whistleblower in Seattle has thrown another wrench into the CMBS market.

But financial services experts said there isn't enough information to draw definitive conclusions about whether the complaint is credible or if it is, whether it would have broad implications for the CMBS market.

On Friday, a report from ProPublica detailed a complaint by John Flynn, a mortgage insider who runs CRE Loan Advisors and an advocate for CMBS reform, alleging that 14 lenders and CMBS servicers inflated property values on real estate collateralizing CMBS loans.

Flynn filed the complaint with the Securities and Exchange Commission, which declined to comment. In the complaint, he claims billions of dollars worth of CMBS loans remain linked to CRE collateral with overinflated net operating incomes, and that property addresses and names were changed from one financing to the next.

When Bisnow contacted Flynn, he declined to discuss the exact contents of his SEC complaint, but he did detail some of the alleged fraud he said he found while studying data on collateral tied to CMBS. Attorneys for Flynn confirmed the report's existence and the accuracy of ProPublica's reporting on its details.

The impact inflated values might have on an already shaky market trying to price risk is substantial. CMBS suffered in the wake of the last recession, but experienced its most successful year within the past decade in 2019, according to Trepp Analytics. Last year alone, Trepp Analytics found that private U.S. CMBS lenders issued about $96.7B in CMBS, a 27% increase from 2018, according to Trepp data cited by ProPublica.

Flynn said he found other discrepancies when analyzing loan level data. He said one of his main concerns involves the discovery of different NOI figures reported on the same properties, including instances where properties underwent name and address changes soon after an initial loan issuance.

"You are talking about the same time period for the same collateral," Flynn said, adding that other issues caught his attention before he made his SEC complaint.

Multiple sectors have engaged heavily in CMBS-related financing, a trend that fell after the Great Recession and picked up again as the financial recovery created more liquidity options for borrowers. A recent report from Trepp Analytics found roughly 20% of lodging properties financed by CMBS or CRE collateralized loan obligations did not make their April mortgage payments.

"This is in comparison to the previous months where that percentage hovered around 2%," Trepp reported. About 10% of retail properties tied to the same types of financing failed to make their April payments, Trepp added.

Trepp confirmed the veracity of the above data when responding to the ProPublica piece, but said other ProPublica claims related to specific loan research tied to Trepp data cannot be confirmed without knowing more specifically what loans ProPublica is referencing.

ProPublica reports that it has verified data alleged in the SEC complaint detailing six of the loans Flynn cites as having inflated NOIs. The report also named banks tied to some of the loans in question, including Deutsche Bank, Wells Fargo and Ladder Capital.

Both Deutsche Bank and Wells Fargo declined to comment to Bisnow, while Ladder Capital did not return multiple requests for comments. The Mortgage Bankers Association told Bisnow it has not been made aware of any issues related to Flynn's claims.

When asked if Flynn could receive a financial reward as a whistleblower, Flynn's legal team said if the SEC recovers more than $1M, Flynn could be eligible for an award if the SEC recommends. That reward could possibly be as high as 20% of any amounts recovered.

One of the loan's ProPublica scrutinized is collateralized by a Doubletree San Diego hotel property in California. The original $36.7M loan was issued by Ladder Capital, ProPublica reported. The hotel property struggled for years to deliver enough net operating income, but was later part of another CMBS, it reports.

ProPublica'sreporting also found data tied to the new loan on the same property ended up showing higher NOI figures for past years than what was initially reported during those same years.

The Doubletree loan mentioned has a high loan-to-value ratio placed on it by Moody's Investors Service. Moody's Vice President of Communications Tom Lemmon said the ratings agency does have analysts reviewing the ProPublica report.

But Lemmon said that the article only mentions Moody's in the context of its assessment of a high LTV ratio estimate placed by Moody's on one of the analyzed loans. This is within Moody's ongoing conservative LTV assessments, Lemmon said, and it's not viewed as a negative by the firm.

"I think we have been consistent in our loan-to-value calculations over the years," Lemmon told Bisnow. "If you look at when we calculate LTV for purposes of feeding into our ratings analysis, we look at it over the long-term. Frankly, I have tons of reports that [show] we consistently have a higher LTV than whatever the appraisers might come in with under the loan."

ProPublica's analysis of the SEC complaint and Flynn's filing drew mixed reactions from the already shaken CMBS market on Friday.

Financial services experts warned that there's not enough data contained within the news report to draw definitive conclusions about whether the complaint is credible or a even a market concern for CMBS.

"While the complaint filed with the SEC and the ProPublica article might turn out to be true, we can't know at this point," University of Houston Law Professor Jim Hawkins said in a statement to Bisnow. "A complaint is just a series of unproven allegations that someone has made."

It's also important to put the legal significance of an SEC complaint into context in this situation, Hawkins said.

"It doesn't represent the SEC's findings about the situation," he said.

"ProPublica's investigation was really limited, it only looked at 'six loans among the thousands Flynn identified as having inflated net operating income,'" he said. "It is possible that those six loans are not representative of the thousands of other loans, and we can't know without more research."

While skepticism abounded among the experts Bisnow talked to about the report, the CMBS market still took notice.  In addition to the analysts and legal experts who commented in this article, Bisnow reached out to 11 other experts and received either no response or the parties declined to comment on the ProPublica article.

“The allegations are certainly troubling," said Brian Mahany, with Mahany Law, an attorney who specializes in dealing with CMBS loans and whistleblower lawsuits. "We deal with CMBS loans every day, and I haven’t seen this."

Alhough he represents CMBS borrowers, Mahany said this is not something he's personally witnessed.

Mahany said that he has already heard multiple sources involved with CMBS taking a great interest in Flynn's allegations, but with few details to go on and not having viewed the complaint himself, he remains unswayed.

But in the marketplace, particularly with coronavirus disrupting every asset class, the significance of the SEC complaint remains ambiguous at best.

Mahany says if he takes the whistleblower allegations in ProPublica at face value, he's not sure how anyone can make a case about losses on misrepresented NOI, when appraisals across the commercial property landscape are in flux after the coronavirus.

"I don't even know what these properties are worth anymore," he said. "So I don't know how you separate any losses tied to the alleged fraud from just the bottom of the market, or from the market collapsing."

With or without these allegations, experts said that CMBS continues to experience a challenging climate in whipsawing markets adjusting to skyrocketing unemployment claims and a post-coronavirus world.

“[Saying] the market is shaky is an understatement," Mahany said. "There has already been $100B CMBS-financed properties that have asked their special servicer for relief, help or assistance, and I think it’s only going to get worse."