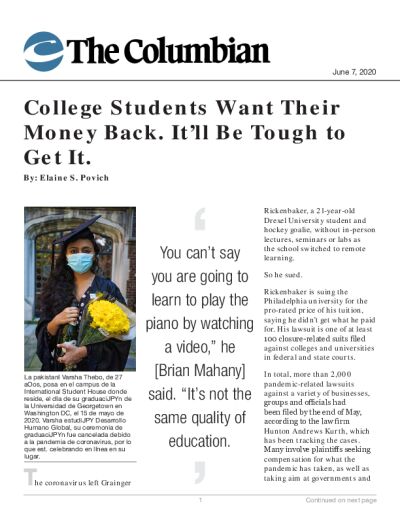 The coronavirus left Grainger Rickenbaker, a 21-year-old Drexel University student and hockey goalie, without in-person lectures, seminars or labs as the school switched to remote learning.

Rickenbaker is suing the Philadelphia university for the pro-rated price of his tuition, saying he didn’t get what he paid for. His lawsuit is one of at least 100 closure-related suits filed against colleges and universities in federal and state courts.

In total, more than 2,000 pandemic-related lawsuits against a variety of businesses, groups and officials had been filed by the end of May, according to the law firm Hunton Andrews Kurth, which has been tracking the cases. Many involve plaintiffs seeking compensation for what the pandemic has taken, as well as taking aim at governments and politicians for their restrictive orders.

Some legal experts say cases such as Rickenbaker’s will be tough to win.

Experienced lawyers and professors say signing up for college may or may not constitute a legal contract. Education has been ongoing, albeit in a new format. The cost to the college of providing that education remotely may be more, or less, depending on how it’s calculated.

The atmosphere of the college or university campus, while a selling point, may or may not be an integral part of the education that the institution provides.

Sam Hodge Jr., a legal studies professor at Temple University’s Fox School of Business also in Philadelphia, said the schools have three defenses against such lawsuits. They can argue that the pandemic has made it impossible to fulfill the contract; they can say they mitigated the damage by providing online instruction; and they can point out that they have had to continue to pay salaries and other expenses.

Moreover, he said, a contract can be superseded by an unforeseen occurrence of nature — most contracts have a “force majeure,” or “act of God” clause — and COVID-19 appears to qualify.

“Most students got most of the semester in the same way they got the rest of their education; now they are all getting the credits they were promised toward their degree,” said Nashville attorney Audrey Anderson, a former in-house counsel for Vanderbilt University who is now in private practice. She suggested since the students are getting their credits and education, they have not been deprived.

“Think of it like going to a restaurant and you are used to the ambiance being a certain way. And there’s a fire next door that interrupts your meal before dessert. Are you going to ask for your money back? They would say, ‘We’ve got to close the restaurant now, but here’s your dessert to go.’”

Rickenbaker, the Drexel hockey player, said in a Facebook message to Stateline that he wasn’t able to talk about the case to reporters. But Roy Willey, a class-action attorney with the Anastopoulo Law Firm who represents Rickenbaker and many other students in a class action, said the cases are about basic fairness.

“Colleges and universities are not unlike any other business in America, and they too have to tighten their belts during this unprecedented time,” he said in an email. “They are not any more entitled to keep money for services they are not delivering than the mom and pop bakery on Main Street.”

Drexel refunded room and board for the spring semester, which began in April (the school is on the quarter system), but not tuition. The suit estimates that Drexel’s tuition reimbursement could be $5 million, plus the $2,405 in fees that Rickenbaker and others paid, plus damages.

In an emailed statement, Drexel’s Niki Gianakaris, director of media relations, said the university’s “top priority is the health and safety of all members of its community during this unprecedented time.”

“Despite the disruption caused by the COVID-19 pandemic, students continue to have access to Drexel’s broad spectrum of academic offerings and support, building on the University’s long-standing tradition of innovation and creativity in the classroom and remote environments,” she said. “The university is aware of the court filing and has no further comment on the pending litigation.”

Many other colleges and universities have returned pro-rated room and board payments to students no longer using university housing and meal plans. But tuition has become a sticking point, since most schools are continuing to educate students through distance learning.

Attorneys for the plaintiffs argue there is more to on-campus learning than what can be transmitted over a video. They cite lab experiments for science majors and on-stage performances for theater and dance majors, among others.

Some attorneys and students have speculated that universities with billions in endowment are in a better position to forgive tuition payments than other schools that rely on tuition to fund the day-to-day education they provide. But high-endowment schools argue that those monies are tightly regulated by agreements with donors and legal restraints and can be used only for certain purposes.

Public universities may find additional protection in laws that make it harder to sue states. The California Tort Claims Act, for example, limits the types of accidents and injuries for which the state can be liable.

Many suits also are being filed against governors and states themselves over the COVID-19 crisis, including businesses that allege they are being hurt by orders to stay closed. In one recent action, a state Court of Claims judge in Michigan ruled Gov. Gretchen Whitmer, a Democrat, was within her constitutional rights to issue executive orders in response to the pandemic, including closing businesses.

In some of the college cases, plaintiffs have focused on their loss of the “city as a classroom” experience, touted by many schools that see their cities as extensions of their campuses.

One of the highest-profile cases is the suit against New York University, partially because the school showcases its presence in the large, vibrant city as an asset, and partially because New York has been among the areas most affected by the virus.

Christina Rynasko of Palm Beach, Florida, whose daughter Emily studies musical theater at NYU, sued the school for a partial refund of tuition, fees, and room and board. “[O]nline classes are particularly ineffective and inadequate for musical theater majors, who cannot participate in required performances, receive in-person feedback/critique, or partake in the facilities necessary to perform,” the suit said.

In an email to Stateline, NYU spokesman John Beckman said the suit is “unwarranted and ill-advised. The reality is that in the face of an unprecedented, world-altering pandemic … faculty continue to teach, and continue to be fully paid; students continue to have class with their faculty; student work is evaluated; academic credit is appropriately awarded; and students will graduate.”

But whistleblower and class-action expert attorney Brian Mahaney said there are grounds for these suits, especially when they involve programs that require hands-on learning like cooking classes, physical education or physical therapy, to name a few.

“You can’t say you are going to learn to play the piano by watching a video,” he said. “It’s not the same quality of education.”

While his firm has not yet filed any suits, Mahaney has heard from parents of a handful of students who want to take action, including parents whose children have gone to the same schools that they attended.

“They say, ‘I paid for my son to get the same education I got, and now we are paying and he’s sleeping till 4 in the afternoon and taking a couple of classes [online] and that’s not the same.’ The quality of the education is not the same,” Mahaney said. “I feel badly for the kids who are taking on debt to finance this.”

Mahaney is best known for bringing a whistleblower claim against Bank of America for fraudulent housing loans ahead of the Great Recession. It resulted in a $17 billion settlement, one of the largest in U.S. history.

Lynn Pasquerella, president of the Association of American Colleges and Universities, which advocates for liberal education, said the lawsuits could have a lasting impact, especially as the schools look toward a safe reopening.

“College and university leaders are doing the best they can to ensure safety of students, faculty and staff as we plan to reopen,” she said in a phone interview. “Leaders are facing enormous uncertainty about COVID-19 standards of care. Even though they have engaged in reasonable decision-making, it’s that uncertainty that will have an impact.”

She called on Congress to protect higher education institutions “against the economic threat of lawsuits at this moment of maximum economic vulnerability.”

Atlanta attorney Derin Dickerson, an expert in class action and higher education law at the Alston & Bird firm, said it is unfortunate that plaintiffs firms are “using these claims against colleges and universities that are doing the best they can to ensure the health and safety of students.”

He said plaintiffs are going to have a tough time showing that paying tuition constitutes an actual contract with the school. “You have to show there’s a contract, that it was breached, and you suffered damages,” he said.

And he says arguments that online education is cheaper may not hold in this instance because colleges had to ramp up technology quickly, and they are still paying their tenured professors to teach, rather than hiring professors for lower pay to helm online courses.

A study by Boston Consulting Group and Arizona State University found online classes saved colleges between $12 and $66 a credit hour, but mostly because the classes were taught by adjuncts and teaching assistants who are paid less than tenured professors.

“In reality, class actions are primarily driven by law firms,” he said. “These class-action law firms walk away with a lot of money.”