A carpet or mat believed to be tied to Jennifer Dulos’ disappearance was left at a Hartford restaurant the day she went missing, but investigators can’t track it down 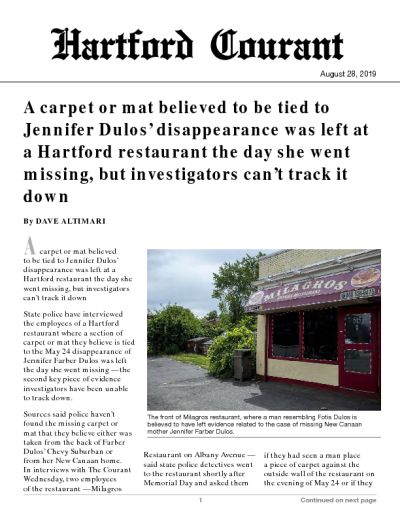 State police have interviewed the employees of a Hartford restaurant where a section of carpet or mat they believe is tied to the May 24 disappearance of Jennifer Farber Dulos was left the day she went missing — the second key piece of evidence investigators have been unable to track down.

Sources said police haven’t found the missing carpet or mat that they believe either was taken from the back of Farber Dulos’ Chevy Suburban or from her New Canaan home. In interviews with The Courant Wednesday, two employees of the restaurant — Milagro’s Restaurant on Albany Avenue — said state police detectives went to the restaurant shortly after Memorial Day and asked them if they had seen a man place a piece of carpet against the outside wall of the restaurant on the evening of May 24 or if they had seen anybody take it after that.

The carpet or mat was left in close proximity to where investigators said they found bags of bloody evidence tied to Farber Dulos stuffed in trash bins along Albany Avenue — the same area where investigators believe a Hartford man removed a knife from a trash can. Sources said there is surveillance video of a man near Milagro’s walking near a black Ford Raptor and grabbing the dark piece of carpet or mat. The man can be seen walking to the corner of Milagro’s and leaning the mat or carpet against the restaurant wall near a trash can. The man then walked back to his vehicle.

Investigators found some of the bags, which had items with Farber Dulos’ blood on them, arrest records show. Dulos has pleaded not guilty to the charges and remains free on $500,000 bail.

The mat or carpet is the second piece of possible key evidence that was dumped on Albany Avenue that police have been unable to recover.

A Hartford man told police he found a bloody pillow and a small knife in a city trash can located on Albany Avenue in front of Milagro’s. State police removed that entire trash can as evidence.

The man told The Courant he traded the knife for a $5 rock of crack cocaine to a man named “Fudge.”

Farber Dulos, 50, was last seen dropping off her children at a New Canaan school on May 24. She was reported missing later that night by friends. Her black Chevy Suburban was found abandoned near Waveny Park that same night.

At about the same time that New Canaan police entered Farber Dulos’ home to search for her, prosecutors say a man they believe is Dulos dropped bags into dumpsters and garbage cans along Albany Avenue. Police have recovered several of those items, including a Vineyard Vines shirt they believe Farber Dulos was wearing the day she went missing and mops and sponges with her blood on them.

Dulos’ girlfriend, Michelle Troconis, 44, also faces hindering prosecution and tampering with evidence charges related to Farber Dulos’ disappearance. She also has pleaded not guilty to the charges and is free on $500,000 bail.

The arrest warrant affidavits charging Dulos and Troconis itemize several items found in the trash cans, but there is no mention of a knife, or any other weapon, or of the mat or carpet. Police traced Dulos and Troconis to Albany Avenue through their cellphones, which pinged in the Albany Avenue area about 7 p.m on May 24, the arrest warrant affidavits say.

The employees said the state police detectives then removed a garbage bag from a small garbage can the restaurant kept outside the restaurant on the sidewalk. They also thoroughly searched the two dumpsters located in a grassy area next to the restaurant.

“They started dumping out the trash can and then just took the whole bag. I didn’t see anything in it," an employee said. "I told them that somebody probably took the carpet to sleep on.”

The employees said several homeless people sometimes sleep in a grassy area behind the restaurant.

“I told them there was an area behind the restaurant where they sometimes sleep and they went back there to look around,” an employee said. He said he didn’t see the carpet or mat that state police were referring to or see anyone on May 24 leave it there.

Two days after police said the trash bags were dumped along Albany Avenue, the Hartford man reached into the light green city trash can and took out a garbage bag that contained a pillow with a small knife under it.

“I put my hand in the garbage can, I picked up the bloody thing, the bloody pillow and I looked underneath and there was a knife under there. It was about a quart of blood on the pillow, all over the pillow. I tell you, whoever got hurt got hurt real bad,” the witness told The Courant last month.

Police have also said they have video of Dulos placing a FedEx mailer box in a storm drain at the intersection of Albany and Garden. They recovered the package, and it contained a doctored license plate to an old car Dulos used to own, according to the Dulos arrest warrant affidavit. They also recovered a Vineyard Vines shirt police believe Farber Dulos was wearing the day she disappeared, along with other items, including a mop and sponges.

On May 31, state police conducted a massive search of the Albany Avenue area using police dogs and teams of detectives. They searched garbage cans, behind people’s homes, vacant lots, basketball courts and storm drains. Sources said they were looking for both the carpet and the knife and pillow.

After that search was fruitless, authorities turned their attention to the Materials Innovation and Recycling Authority’s trash-to-energy plant in Hartford’s South Meadows. Since garbage pick-up was delayed by one day because of Memorial Day, most of the trash from the Albany Avenue area had not been incinerated. Investigators spent nearly three weeks at a local trash plant looking through mountains of trash.

As many as 15-20 detectives a day worked at the plant, going through 30-35 tons of trash daily searching for evidence from trash dumped on Albany Avenue on the night of May 24. State police haven’t said what they were looking for and have not revealed if they found any possible evidence from that search.

Dulos and Farber Dulos have been embroiled in a bitter two-year divorce and custody battle, a contentious case full of back-and-forth accusations of ignoring court orders, threatening each other in front of their five children and allegations of threats to hurt the children or each other.

Stamford/Norwalk State’s Attorney Richard Colangelo said in Superior Court when arguing for higher bail for Dulos that investigators found evidence that an assault occurred in the garage of her New Canaan home. Authorities have said they are treating Farber Dulos’ disappearance as both a missing persons case and a criminal investigation.

Colengelo said that they also found DNA from Dulos mixed with his wife’s blood on a kitchen faucet in her house and that there is no explanation as to why it was there. Dulos had been at the Farber Dulos’ New Canaan home two days before she disappeared for a cookout with the couple’s five children. Colangelo said witnesses have said they did not see him go into the house that evening.