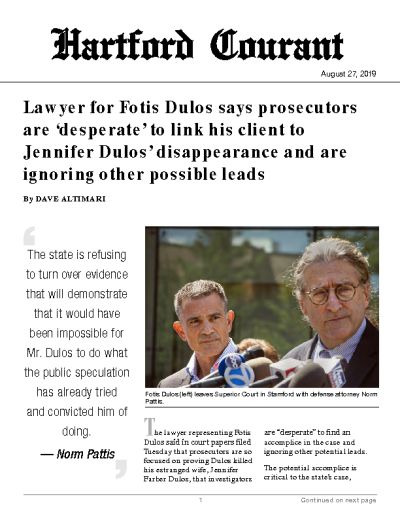 The lawyer representing Fotis Dulos said in court papers filed Tuesday that prosecutors are so focused on proving Dulos killed his estranged wife, Jennifer Farber Dulos, that investigators are “desperate” to find an accomplice in the case and ignoring other potential leads.

The potential accomplice is critical to the state’s case, attorney Norm Pattis said, because Dulos can prove he was no where near New Canaan the day Farber Dulos disappeared.

Pattis’ motion seeking an emergency order to compel prosecutors to turn over evidence said investigators interviewed colleagues of Dulos at his luxury home building business, The Fore Group, Monday evening in an effort “to implicate Mr. Dulos in the disappearance of his wife, even asking the employee to speculate on where Ms. Dulos’ body might be, an invitation the witness refused. The state seems desperate to develop an accomplice in the case, rather than refocusing its effort on trying to build a case based on available evidence.”

In the five-page motion filed in Superior Court in Stamford, Pattis is asking the state turn over any interviews they have done with Dulos’ girlfriend, Michelle Troconis, as well as any electronic data from Dulos’ computers and his cellphone which police have had since the day after Farber Dulos, 50, disappeared.

“The state appears to be proceeding on a theory that Ms. Dulos vanished because of foul play involving Mr. Dulos,” Pattis said.

Pattis said the evidence he is seeking is critical to Dulos’ defense because it can prove that Dulos wasn’t in New Canaan on the morning of May 24. The state already knows that Troconis wasn’t in New Canaan because of eyewitness accounts and video surveillance from a supermarket which shows her going into the store that morning.

“The state is refusing to turn over evidence that will demonstrate that it would have been impossible for Mr. Dulos to do what the public speculation has already tried and convicted him of doing,” Pattis wrote.

Pattis said among that evidence that could help his client is Troconis’ statement to police. Pattis said he believes she has told state police she was at home with Dulos in Farmington at certain points of the morning at about the time Farber Dulos disappeared, making it impossible for him to have been involved in her May 24 disappearance.

Pattis said phone records he is seeking from the state also would show communications Dulos had that morning and prove that he was at home in Farmington, not New Canaan.

“The defendant should not be compelled to fiddle in the bright light of public scorn while the state wastes time and resources in the futile effort to place him at the scene of a crime he didn’t commit,” Pattis wrote.

Dulos, 51, and Troconis, 44, have both pleaded not guilty to hindering prosecution and tampering with evidence charges related to Farber Dulos’ disappearance. They are both free after posting $500,000 bail.

They were arrested after police said a man resembling Dulos was seen dumping two garbage bags into trash cans along Albany Avenue in Hartford that contained clothing, mops and sponges containing Farber Dulos’ blood. State police said in an arrest warrant affidavit that they were led to Albany Avenue by federal authorities who notified them that Dulos’ cellphone was in the vicinity of Albany Avenue around 7 p.m. on the day Farber Dulos disappeared.

At Dulos’ last court appearance, Norwalk/Stamford State’s Attorney Richard Colangelo said that he still hadn’t received the cellphone data from Dulos’ phone. Colangelo has said he is still waiting for evidence to be processed at the state lab as well.

Colangelo has said that investigators found Dulos’ DNA mixed with his estranged wife’s blood on a kitchen faucet in her New Canaan home and that there is no explanation as to why his DNA would be there.