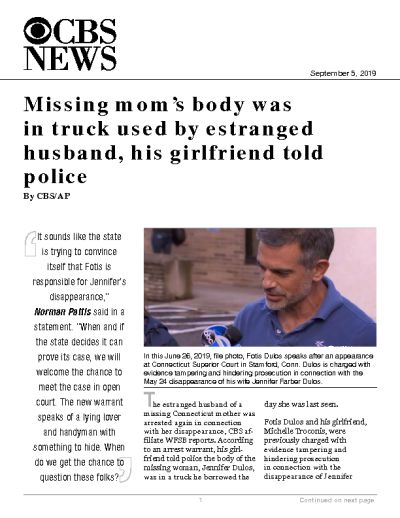 The estranged husband of a missing Connecticut mother was arrested again in connection with her disappearance, CBS affiliate WFSB reports. According to an arrest warrant, his girlfriend told police the body of the missing woman, Jennifer Dulos, was in a truck he borrowed the day she was last seen.

Fotis Dulos and his girlfriend, Michelle Troconis, were previously charged with evidence tampering and hindering prosecution in connection with the disappearance of Jennifer Dulos. The 50-year-old mother of five disappeared May 24 from her New Canaan home amid contentious child custody proceedings with Fotis Dulos. She hasn't been seen since.

Police allege Fotis Dulos and Troconis went to Hartford to dispose of garbage bags containing items with Jennifer Dulos' blood on them the night the woman disappeared.

The latest charge against Fotis Dulos stems from surveillance photos that show him dropping a white plastic garbage bag into a trash can at a car wash in Avon several days later, where he was having his employee's truck washed, reports WFSB.

According to the newly-released arrest warrant, police asked Troconis why she thought Fotis Dulos had the truck cleaned, and she said, "Well obviously ... all the evidence says because ... you showed me the picture of the blood in the door it's because the body of Jennifer at some point was in there."

The couple had previously pleaded not guilty and posted $500,000 bail. Fotis Dulos posted another $500,000 bail and was released Wednesday. Troconis also bonded out on Thursday, WFSB reports.

An attorney said Fotis Dulos will plead not guilty to the new charge and criticized police for focusing all their attention on his client. An attorney for Troconis said she should be presumed innocent.

The new 43-page warrant revealed additional details about the case, including allegations Fotis Dulos drove the truck used by his construction business employee to New Canaan May 24, lay in wait for Jennifer Dulos to return home after dropping her five kids off at school, and later drove away with her body. Investigators earlier said they found evidence of a "clean up" in the home's garage, and Jennifer Dulos' blood was found mixed with the DNA of her estranged husband on a sink, a prosecutor has said.

Troconis initially gave police "self-contradictory" information, but after pointed questioning, admitted she couldn't account for Fotis Dulos' whereabouts between 8 a.m. and 1 or 2 p.m. on the day of his wife's disappearance, the warrant said. She also admitted that she was riding with Dulos in his Ford Raptor pickup truck as he spent a half an hour disposing of garbage bags in Hartford trash receptacles that night, but she claimed she was on her cellphone and didn't know what he was doing.

The warrant also says investigators found handwritten notes in Fotis Dulos' Farmington home detailing the couple's schedule of activities on May 24 and 25 — some of which Troconis later admitted were bogus. Troconis allegedly said the notes were to "help them remember" their activities on those dates.

Detectives would later refer to the notes as "alibi scripts," according to the warrant.

Troconis also admitted that the day of the woman's disappearance, Fotis Dulos was cleaning what he said was coffee out of his employee's truck at his Farmington home. She admitted disposing of paper towels from the cleanup, but said it didn't smell like coffee.

Fotis Dulos' attorney said prosecutors are trying to "convince" themselves that his client is responsible for Jennifer Dulos' disappearance. In statements Thursday, he appeared to call into question the accounts of Troconis and the construction employee.

"It sounds like the state is trying to convince itself that Fotis is responsible for Jennifer's disappearance," Norman Pattis said in a statement. "When and if the state decides it can prove its case, we will welcome the chance to meet the case in open court. The new warrant speaks of a lying lover and handyman with something to hide. When do we get the chance to question these folks?"

Pattis said in a statement released to WFSB: "Our hearts go out to Ms. Troconis. We are confident that she will, in the end, tell the truth at trial. The state is a terrifying enemy, but a clean conscience is a powerful ally."

Troconis' attorney Andrew Bowman told WFSB: "Remember that Michelle is presumed innocent and she should be. We're prepared to let judgment in this case rest in the jury's hands."

Police say the employee's alibi of working at a job site all day the day Jennifer Dulos disappeared checked out and they believe he had no involvement.

"It's an exhausting fight," Fotis Dulos told reporters on Wednesday evening. "I love my children, that's about it."

Dulos is scheduled to appear in court September 12 on the new tampering charge.