Police revealed new theories and evidence after Fotis Dulos and Michelle Troconis were arrested for a second time in connection with the Jennifer Farber Dulos case.

Here’s what we learned. 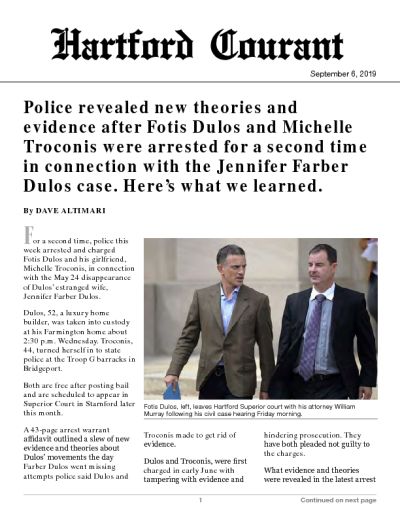 For a second time, police this week arrested and charged Fotis Dulos and his girlfriend, Michelle Troconis, in connection with the May 24 disappearance of Dulos’ estranged wife, Jennifer Farber Dulos.

Dulos, 52, a luxury home builder, was taken into custody at his Farmington home about 2:30 p.m. Wednesday. Troconis, 44, turned herself in to state police at the Troop G barracks in Bridgeport.

Both are free after posting bail and are scheduled to appear in Superior Court in Stamford later this month.

A 43-page arrest warrant affidavit outlined a slew of new evidence and theories about Dulos’ movements the day Farber Dulos went missing attempts police said Dulos and Troconis made to get rid of evidence.

Dulos and Troconis, were first charged in early June with tampering with evidence and hindering prosecution. They have both pleaded not guilty to the charges.

What evidence and theories were revealed in the latest arrest warrant affidavits:

Investigators believe Dulos was waiting for Farber Dulos at her New Canaan home on Welles Lane and then drove from the home with her body in her car.

Using surveillance video and other evidence, police said Dulos went to New Canaan the morning of May 24 and was “lying in wait at 69 Welles Lane for his wife to return home.”

The last images police have of Farber Dulos show her driving back home after dropping her children off at school. Those images were captured on a neighbor’s security camera at 8:05 a.m.

Investigators believe a violent crime occurred in Farber Dulos’ home and an effort to clean it up took place between 8:05 a.m. and 10:25 a.m.

Farber Dulos’ Chevrolet Suburban was seen on surveillance camera leaving the Welles Lane home about 10:25 a.m. Investigators wrote in the affidavit: “Dulos is believed to be operating the victim’s vehicle which is carrying the body of Jennifer Dulos and a number of other items associated with the clean-up which occurred in the garage of the residence.”

State police investigators believe Dulos was using his employee’s truck to travel to and from New Canaan the morning of Farber Dulos’ disappearance.

After interviews with the employee, investigators believe that Dulos was driving the man’s Toyota Tacoma the morning of Farber Dulos’ disappearance.

Investigators then tracked the vehicle along its route, spotting it on various surveillance cameras. It was first seen on Route 15 south in Fairfield at 6:36 a.,m. then next on Route 15 in New Canaan at 7:03 a.m. It was spotted at 7:40 a.m. parked in a turnout on Lapham Road in New Canaan, about 100 feet from where Farber Dulos’ car was later found abandoned.

The Tacoma was seen driving northbound on Route 15 at 11:12 a.m. They follow the vehicle through various bits of surveillance footage, from Route 15 to Route 8 to I-84 before it is seen on Mountain Road in Farmington.

There appears to have been Farber Dulos’ blood in the employee’s truck, but Fotis Dulos tried to clean it, investigators believe.

Detectives collected a blood-like substance from the passenger seat that had been installed in the Toyota Tacoma. Testing by the state lab revealed that the substance had Farber Dulos’ DNA on it.

Troconis told investigators that Dulos was cleaning what he said was a coffee stain from inside the truck and at one point handed her a stained rag. Though she could not recall the color of the stain, she said she did recall that it did not smell like coffee.

Speaking to the employee, investigators learned that Dulos had urged the man to remove the seats from the truck and get rid of them before selling the truck.

The employee said he did remove the seats, but held onto them without telling Dulos in case they were needed by the authorities.

Without the employee’s knowledge, Dulos took the truck to Russell Speeder’s Car Wash in Avon on May 29 to have it cleaned, paying $250 for a full detailing.

The employee said he doesn’t regularly clean his truck and Dulos had never had it washed.

Troconis was led to believe the body was in the truck.

Troconis was interviewed by investigators at least three times, at first offering contradictory information, though she later admitted that she had not been truthful.

In an Aug. 13 interview with police, Troconis spoke about efforts to clean the employee’s Toyota Tacoma, saying Dulos took it to Russell Speeder’s Car Wash in Avon for a full detailing.

When investigators asked her why she thought Dulos was washing the truck, she replied, "Well obviously...all the evidence says because...you showed me the picture of the blood in the door it’s because the body of Jennifer at some point was in there.”

It does not say in the arrest warrant affidavit if Troconis saw a body in the Tacoma.

They wrote notes that investigators called the “Alibi Scripts.”

In a June 3 search of Dulos’ Jefferson Crossing home, investigators found handwritten notes in the business office of the home that outlined specifics, including times and activities on the day Farber Dulos went missing and the following day.

When investigators asked Troconis about the notes, she said they wrote them to “help them remember” what they did on May 24 and 25.

As the investigation progressed, detectives said items on the lists, that police referred to as the “Alibi Scripts,” were proven inaccurate or incomplete. The detectives said the lists did not include any incriminating behavior during that time period, including tossing out trash bags in Hartford, which was seen on video surveillance.

No officials have publicly said they believe that Farber Dulos, a mother of five, is dead, but in the arrest warrant affidavit for Dulos released Wednesday, they make reference to a possible killing.

In one paragraph, investigators said they believe Dulos was driving a vehicle that had Farber Dulos’ body in it.

Also, based on evidence police showed Troconis, she answered that Farber Dulos’ body was in the Toyota Tacoma.