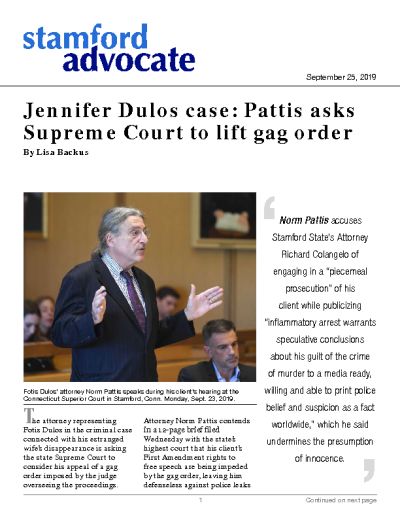 The attorney representing Fotis Dulos in the criminal case connected with his estranged wife’s disappearance is asking the state Supreme Court to consider his appeal of a gag order imposed by the judge overseeing the proceedings.

Attorney Norm Pattis contends in a 12-page brief filed Wednesday with the state's highest court that his client's First Amendment rights to free speech are being impeded by the gag order, leaving him defenseless against police leaks and the intense media scrutiny surrounding the disappearance of Jennifer Dulos.

"Can a man not yet accused of a crime publicly criticize those investigating him?" Pattis wrote in the brief. "The answer was until recently, without question, ‘yes.’ But comes now a ruling in a case arising out of the Judicial District of Stamford, in a which a man suspected of murder, and his counsel, are bound by judicial order from speaking out."

Pattis accuses Stamford State's Attorney Richard Colangelo of engaging in a "piecemeal prosecution" of his client while publicizing "inflammatory arrest warrants speculative conclusions about his guilt of the crime of murder to a media ready, willing and able to print police belief and suspicion as a fact worldwide," which he said undermines the presumption of innocence.

Pattis is asking the court take up an appeal of the order on several grounds, including that police have repeatedly said in the warrants they "believe" Fotis Dulos was involved in an assault and disappearance on his estranged wife, but have not provided solid evidence or charged him with murder.

The court would have to agree to hear the appeal, before it can be filed. Pattis filed a similar request in the Alex Jones case that the Supreme Court will hear on Thursday in Hartford.

"Mr Dulos' efforts to clear his name are now barred by judicial decree," Pattis wrote in the brief. "Potential jurors are spoon-fed damning suspicions; Mr. Dulos is ordered to remain mute. His fair trial rights are being fatally compromised."

Pattis is asking for an immediate review of the gag order.

"Four months after she vanished, there are still no credible leads about where she went, and why," Pattis said. "Prosecutors have yet to share a shred of evidence with Mr. Dulos or his counsel supporting the now highly publicized claims" about the apparent struggle in Jennifer Dulos’ garage, the blood found on the items Fotis Dulos is accused of disposing and that he was involved in the disappearance.

Fotis Dulos, 52, and Michelle Troconis, 44, have each been charged with two counts of tampering with evidence and hindering prosecution in connection with the May 24 disappearance.

During a hearing Monday about issues related to Fotis Dulos’ electronic monitoring device, Pattis signaled his intent to appeal the gag order in the case.

The order, he said, makes it impossible to defend his client in instances like last week, when he was “bad-mouthed” by friends of his estranged wife on talk shows Dr. Phil and Dr. Oz. He questioned whether the the gag order would apply to them, or if the order only “flowed one way.”

Superior Court Judge John Blawie issued the gag order earlier this month. In most cases, Blawie wrote, a gag order would be “unnecessary.” This case, however, is unusual, he said.

“The problem with pervasive information or misinformation in the social media age is that in a high-profile case, it carries the potential to overwhelm the vital, constitutionally guaranteed right to a fair trial,” Blawie wrote.

Blawie specifically cited theories floated by Pattis, such as Jennifer Dulos faking her own disappearance, a la the novel “Gone Girl,” or his suggestion that she might have perpetrated a “revenge suicide” plot. The theories have drawn sharp rebukes from Jennifer Dulos’ family and friends and “Gone Girl” author Gillian Flynn.

“The extent and the nature of the coverage is not merely a result of the public record of the case, but rather, it reflects the tendency of some to fan the flames of publicity by providing the media with salacious, inadmissible, and often prejudicial details,” Blawie wrote.

Colangelo had requested the gag order, saying Pattis has “undoubtedly crossed the line” by publicly making “improper and damaging” comments about the case.

“Media coverage has been extensive and pervasive. And much of it is centered on comments (Fotis) Dulos’ lawyer has made — many directly to the press — about the case,” Colangelo said.

Pattis penned an argument against the gag order that claimed Fotis Dulos has the right to respond to “damaging public comments fueled in large part by the warrant filed on existing charges and the sotto voce whispering of tattle-tale officers whispering innuendo to eager reporters.”

Pattis, who has a reputation as an outspoken advocate and legal maverick, has frequently been quoted in the media since joining the case.

In addition to some of his theories, in an interview with WPLR’s Chaz and AJ, Pattis also claimed that Troconis passed a polygraph test. However, Colangelo said Troconis has never taken a polygraph.

Jennifer Dulos, 50, was last seen on a neighbor’s security camera returning home around 8:05 a.m. May 24 after dropping off her five children at a nearby school.

Police believe Fotis Dulos was “lying in wait” when she arrived at her Welles Lane home, where they found evidence that she was the victim of a “serious physical assault” based on blood stains and spatter in the garage, according to arrest warrants.

The videos show them making a series of stops in a 4-mile stretch with Fotis Dulos tossing garbage bags that were later determined to contain his wife’s blood and clothing, arrest warrants state.

According to the warrants, police believe Fotis Dulos was “lying in wait” when Jennifer Dulos arrived home from dropping off their children at school around 8:05 a.m. that morning.

Police said Fotis Dulos used a former employee’s pickup truck to drive to and from New Canaan that day. Police said he then urged the employee to swap out the seats of the truck and had the vehicle washed and detailed several days after the disappearance.

The employee eventually removed the seats, but turned them over to investigators who found Jennifer Dulos’ blood on one of them, the arrest warrants state.

Troconis was arraigned last week on the charge during a brief appearance in state Superior Court in Norwalk.

Fotis Dulos is scheduled to return to state Superior Court in Stamford on Oct. 4, while Troconis is due back on Oct. 10.