Fotis Dulos, in national interview, hopes Jennifer Dulos case ‘will be over soon’ 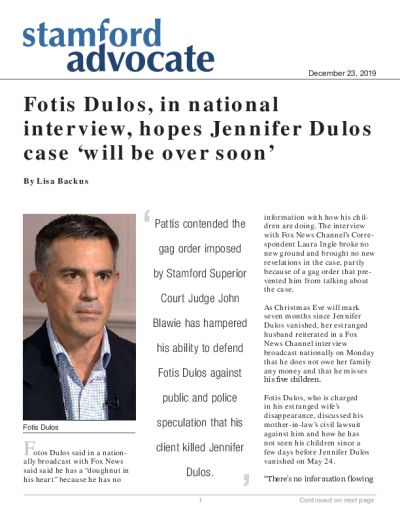 As Christmas Eve will mark seven months since Jennifer Dulos vanished, her estranged husband reiterated in a Fox News Channel interview broadcast nationally on Monday that he does not owe her family any money and that he misses his five children.

Fotis Dulos, who is charged in his estranged wife’s disappearance, discussed his mother-in-law’s civil lawsuit against him and how he has not seen his children since a few days before Jennifer Dulos vanished on May 24.

"There's no information flowing with regards to how they're doing,” he told Fox News correspondent Laura Ingle in his Farmington home. “I love my children. I miss them. I think about them every morning when I wake up. That's who I think about. I feel I have a donut in my heart, with a big hole. And I don't wish it to anybody. And I hope I get — I hope this will be over soon. All I can do is work hard every day, step-by-step, until we get through all of this.”

His children have been staying with Jennifer Dulos’ mother, Gloria Farber, who is also seeking permanent custody of them.

As part of the conditions of his release on bail, Fotis Dulos — charged with two counts of tampering with evidence and hindering prosecution — has been banned from contacting his children.

“As we face this first holiday season without Jennifer, our sole focus is on creating a safe and joyous Christmas for her five children rather than to litigate this case through the media,” family friend Carrie Luft said in a statement issued to Fox News.

Fotis Dulos declined to answer questions about how he and his wife met, citing a gag order prohibiting anyone involved in the criminal cases against him from speaking. He also referred to the gag order when asked if he had any idea where his estranged wife could be located.

Defense attorney Norm Pattis, who is representing Fotis Dulos in the criminal proceedings, argued this month before the state Supreme Court to have the gag order overturned.

While using the gag order to shield questions from Fox News about his criminal case, Fotis Dulos instead discussed his “excellent” relationship with his late father-in-law, Hilliard Farber. He said the money flowed between the Farbers and his high-end real estate development company, Fore Group, as “a family business.”

“It started in 2004 and until 2010 it was more of a business relationship,” he told Fox News. “So, the money would go again both ways, but there were formal notes, there was substantial interest, and there was repayment, of the loans.

“After 2010, the relationship evolved to be a little more casual,” Fotis Dulos added. “It was, again, a two-way relationship so, whenever the money was needed for construction projects, Hilliard would provide it."

Gloria Farber filed suit against Fotis Dulos in early 2018, months after her husband died and her daughter filed for divorce, claiming he and the Fore Group owed the family $2.5 million in unpaid business loans.

Attorney William Murray, representing Fotis Dulos in the civil case, claimed during a two-day trial earlier this month that Farber’s attorneys inaccurately calculated the money that was exchanged.

“Mr. Dulos makes a lot of claims, none of which are true,” attorney Richard Weinstein, representing Gloria Farber, said in statement to Fox News. “Mr. Dulos’ credibility is lacking, he manipulated the financial statements and played with the numbers. His own documents and tax returns reveal he owes $1.740 million. We believe we have produced enough evidence to win our case and await the judge's decision."

Fotis Dulos showed Ingle documents submitted as evidence in the trial, including checks that he claimed to have written to Hilliard Farber and receipts for payments made by the Farbers to him for the luxury guest house the Fore Group built on their property in Pound Ridge, N.Y.

Murray implied during the trial that the receipts were calculated as part of Weinstein’s accounting of the loans, when in fact, he said, they were payments for the guest house.

Murray filed a counterclaim last week, contending that based on the amount of money that was given and received, Farber actually owes his client money.

“I think we were able to put the evidence in front of a judge. We don’t owe $2.5 million that has been out in the press and in their allegations,” Fotis Dulos told Fox News. “We are actually owed $1 million.”

When asked by Ingle how he was holding up while facing the two-year lawsuits and the criminal charges in his wife’s disappearance, Fotis Dulos said, “I’m talking it day by day.”

According to arrest warrants, police believe Fotis Dulos was “lying in wait” when Jennifer Dulos arrived home from dropping off their children at school in New Canaan at around 8:05 a.m. May 24.

Police said two people resembling Fotis Dulos and his former girlfriend Michelle Troconis were captured on video in Hartford later that night around the time Jennifer Dulos was reported missing.

The man police contend is Fotis Dulos was seen on the videos dumping bags that were later determined to contain his wife’s blood and clothing, the warrants said.

A separate arrest warrant said Fotis Dulos and Troconis also took a red Toyota Tacoma pickup truck belonging to a Fore Group employee to a car wash in the days after the disappearance. Police said in the warrant that they believe Fotis Dulos drove the truck to New Canaan the morning his wife vanished.

Fotis Dulos also urged the employee to remove the seats, which he did but turned them over to investigators who found Jennifer Dulos’ blood on one of them, according to the warrant.

Fotis Dulos will appear in Stamford Superior Court in the criminal cases on Jan. 9.