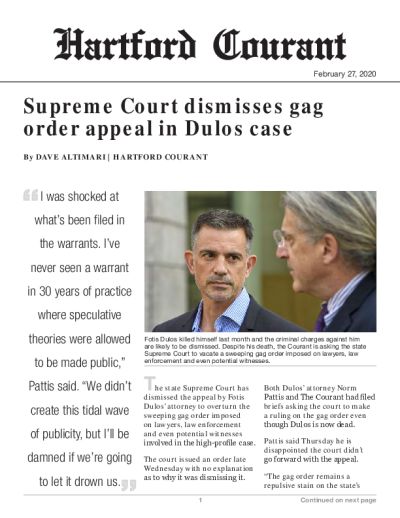 The state Supreme Court has dismissed the appeal by Fotis Dulos’ attorney to overturn the sweeping gag order imposed on lawyers, law enforcement and even potential witnesses involved in the high-profile case.

The court issued an order late Wednesday with no explanation as to why it was dismissing it. Both Dulos’ attorney Norm Pattis and The Courant had filed briefs asking the court to make a ruling on the gag order even though Dulos is now dead.

Pattis said Thursday he is disappointed the court didn’t go forward with the appeal.

“The gag order remains a repulsive stain on the state’s constitutional terrain," Pattis said. “The Court’s decision to use Mr. Dulos’s death as a pretext for avoiding the issue is chilling.”

Dulos died in January, two days after he attempted to kill himself in the garage of his Farmington home. Facing the possibility of going back to prison, Dulos clamped a vacuum hose to his car inside the garage and inhaled the carbon monoxide. He was pulled from the garage by Farmington police, who had been asked to do a wellness check on Dulos because he was supposed to be in Stamford for a hearing on his $6 million bond being revoked.

Dulos was facing murder charges in the death of his estranged wife, Jennifer Farber Dulos, who disappeared May 24 after dropping her children off at school and hasn’t been seen since.

The state is expected to ask Judge John Blawie, who issued the gag order, to dismiss the criminal case at a hearing on March 3.

The state Supreme Court held an emergency hearing in December to consider Pattis’ challenge to a gag order imposed by Superior Court Judge John Blawie. A full panel of justices spent more than an hour questioning Pattis and assistant state’s attorney Robert Scheinblum about the merits of the gag order. The order prohibits not only attorneys, but also potential witnesses and Dulos or his family from commenting on the case.

Rather than simply dismiss the Dulos murder case, the Courant asked the court to either vacate the gag order or make a ruling on whether it was unconstitutional.

Dulos killed himself last month and the criminal charges against him are likely to be dismissed. He was facing murder charges in the death of his estranged wife, Jennifer Farber Dulos, who disappeared May 24 after dropping her children off at school and hasn’t been seen since.

Attorney William Fish, in a brief filed late Tuesday on behalf of the Courant, wrote that not vacating the gag order will set a “dangerous precedent.”

Attorney Norm Pattis, who represented Dulos, also filed a brief asking the court to proceed with the case despite his client’s death, arguing that it’s not a moot issue as the state now contends. In his brief, Pattis reiterates again his desire to try and keep the criminal case alive by substituting Dulos’ estate as a defendant, vowing to fight all the way to the U.S. Supreme Court if necessary.

Pattis said the gag order still constrains both himself and Dulos’ family from fighting to exonerate his name.

“The late Mr. Dulos’ estate also has a liberty interest in his legacy that public speculation tarnishes while a gag order silences his advocates and family,” Pattis said. “The late Mr. Dulos’ attorneys and his family have a story to tell based on a careful consideration of all available evidence. The gag order prevents them from telling that story.”

The Courant filed an amicus brief opposing the gag order, arguing that it exceeds the court’s authority and amounts to prior restraint of free speech. In its brief filed Tuesday, the Courant argued that if the court doesn’t vacate the gag order it will set a “dangerous precedent.”

“The Court should vacate the Gag Order because allowing the Gag Order to stand would have legal consequences, both for the media’s First Amendment rights in the present situation, but also establishing a dangerous precedent in future cases,” the brief says.

During the oral arguments in December, Pattis said that the gag order is unfair because Dulos is unable to fight back against the allegations raised in arrest warrants that he said “speculate” Dulos waited at his estranged wife’s New Canaan home on the morning of May 24, killed her and drove the body away in her own vehicle. At that time, Dulos had been charged twice with tampering with evidence. The murder charge came later.

“I was shocked at what’s been filed in the warrants. I’ve never seen a warrant in 30 years of practice where speculative theories were allowed to be made public,” Pattis said. “We didn’t create this tidal wave of publicity, but I’ll be damned if we’re going to let it drown us.”

The justices didn’t focus as much on the details of the Dulos case but more on the breadth of the gag order issued by Blawie and whether it is even necessary in Connecticut, where, under the state’s voir dire jury selection process, lawyers can question jurors and use challenges to keep them off the jury if they feel they are biased.

Several justices also pointed out that the state recently argued that pre-trial publicity didn’t have an impact in the high-profile Cheshire murders trials. Joshua Komisarjevsky is seeking a new trial based partly on the issue that his trial should have been moved out of New Haven because of the massive publicity surrounding the case. The state argued in that case that the voir dire process worked well. There was a gag order imposed in that case.

Scheinblum argued that a judge should have the option to impose a gag order after reviewing all other options. Scheinblum admitted that the state asked for a gag order on just Pattis after he incorrectly stated in open court that Michelle Troconis, Fotis Dulos’ former girlfriend, had taken and passed a polygraph test. Blawie extended the order to include any potential witnesses, law enforcement, Fotis Dulos and any of his family and friends.

In arguing to dismiss the case, Scheinblum said the case is moot because Dulos is now dead. He argued that since the defendant in the case is dead, there would be no available remedy if the state’s highest court struck down the gag order.

Scheinblum argued if a similar gag order was applied in a future high-profile case, attorneys in that case could pick up the fight if they wanted to.

“Gag orders, though rare, are capable of arising again in another high-profile case in which the parties would have ample opportunity to appeal the gag order due to the protracted nature of litigation such as this one,” Scheinblum said.

Troconis and attorney Kent Mawhinney have both been charged with conspiracy to commit murder and their cases are pending in Superior Court in Stamford. Mawhinney is being held on a $2 million bond. Tronconis is free after posting a combined $2.1 million bond. Both are expected to be tried despite Dulos’ death.