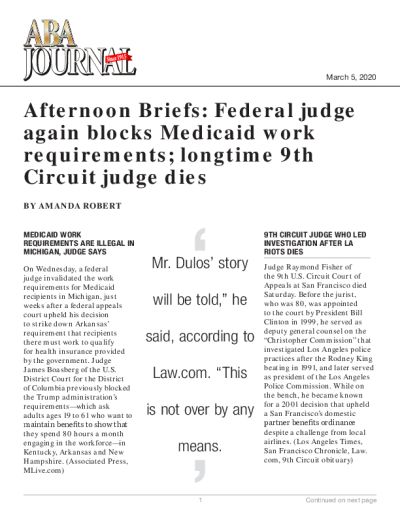 On Wednesday, a federal judge invalidated the work requirements for Medicaid recipients in Michigan, just weeks after a federal appeals court upheld his decision to strike down Arkansas’ requirement that recipients there must work to qualify for health insurance provided by the government. Judge James Boasberg of the U.S. District Court for the District of Columbia previously blocked the Trump administration’s requirements—which ask adults ages 19 to 61 who want to maintain benefits to show that they spend 80 hours a month engaging in the workforce—in Kentucky, Arkansas and New Hampshire. (Associated Press, MLive.com)

Judge Raymond Fisher of the 9th U.S. Circuit Court of Appeals at San Francisco died Saturday. Before the jurist, who was 80, was appointed to the court by President Bill Clinton in 1999, he served as deputy general counsel on the “Christopher Commission” that investigated Los Angeles police practices after the Rodney King beating in 1991, and later served as president of the Los Angeles Police Commission. While on the bench, he became known for a 2001 decision that upheld a San Francisco’s domestic partner benefits ordinance despite a challenge from local airlines. (Los Angeles Times, San Francisco Chronicle, Law.com, 9th Circuit obituary)

Virginia’s Appalachian School of Law has demonstrated compliance with Standard 501, which deals with admissions. The council of the Section of Legal Education and Admissions to the Bar of the American Bar Association reached this decision when in met in February, according to notice posted on the section website. The noncompliance finding was made in May 2017. For that year, the law school’s median LSAT score was 143, and the median undergraduate GPA was 2.86, according to the 509 Report for 2017. In its most recent 509 Report, the law school’s median LSAT score is 145, and the median undergraduate GPA is 3.13. The council also found in May 2017 that the law school was out of compliance with Standard 301, which deals with programming. By December 2017, the council determined the law school was in compliance with the standard. (February notice)

A new campaign at Reed Smith is targeting the stigma around mental illness in the hopes that it will help more lawyers seek the help they need. The firm’s #stopthestigma campaign will feature several events and activities, including nationwide mental health and safety leadership training for managers and a video series that features stories involving mental health from its lawyers and professional staff. “As an early signatory to the ABA Pledge for Change, Reed Smith is committed to eliminating the stigma associated with mental health and substance related conditions so that everyone—including our lawyers and professional staff—is comfortable seeking help and using the resources they need,” said Casey Ryan, the firm’s global head of legal personnel. (Law.com, March 3 news release)

Connecticut attorney Norm Pattis says he has received several book offers and movie-deal requests since representing Fotis Dulos, who was charged with murder, felony murder and kidnapping after his wife disappeared and then committed suicide in late January. Pattis may consider those options for telling Dulos’ story, especially if he is unable to get a trial for his former client. “Mr. Dulos’ story will be told,” he said, according to Law.com. “This is not over by any means.” On Tuesday, Superior Court Judge Gary White agreed to the state’s attorney’s request to drop the charges against Dulos. (Law.com)