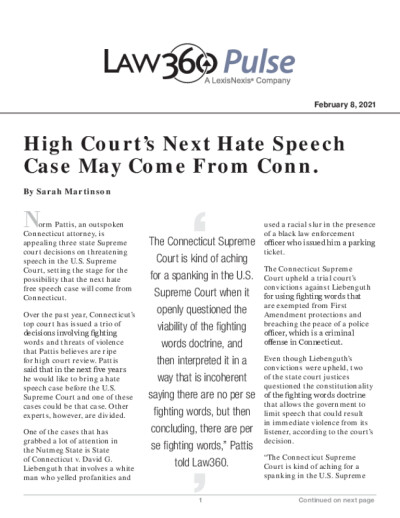 Norm Pattis, an outspoken Connecticut attorney, is appealing three state Supreme court decisions on threatening speech in the U.S. Supreme Court, setting the stage for the possibility that the next hate free speech case will come from Connecticut.

Over the past year, Connecticut’s top court has issued a trio of decisions involving fighting words and threats of violence that Pattis believes are ripe for high court review. Pattis said that in the next five years he would like to bring a hate speech case before the U.S. Supreme Court and one of these cases could be that case. Other experts, however, are divided.

One of the cases that has grabbed a lot of attention in the Nutmeg State is State of Connecticut v. David G. Liebenguth that involves a white man who yelled profanities and used a racial slur in the presence of a black law enforcement officer who issued him a parking ticket.

The Connecticut Supreme Court upheld a trial court’s convictions against Liebenguth for using fighting words that are exempted from First Amendment protections and breaching the peace of a police officer, which is a criminal offense in Connecticut.

Even though Liebenguth’s convictions were upheld, two of the state court justices questioned the constitutionality of the fighting words doctrine that allows the government to limit speech that could result in immediate violence from its listener, according to the court’s decision.

In Pattis’ appeal of the court’s ruling, he argued fighting words don’t breach the peace of police officers and that officers “have thick enough skins to withstand offensive speech.”

After the state high court’s Liebenguth decision, the Connecticut Bar Association held a panel discussion on what constitutes hate speech, which led to a proposal to amend the state’s rules of professional conduct for attorneys to prohibit harassment and discrimination in the legal profession, according to Pattis, who opposes the proposed rule change.

“It’s a stupid and unnecessary rule,” Pattis said. “Nobody is harassing anybody by speaking out on a matter of public concern and expressing their opinions.”

Richard Wilson, a University of Connecticut law professor and free speech scholar, told Law360 that he doesn’t think that the state Supreme Court opened the door to a hate speech exception in its Liebenguth ruling, but that the court wrongly applied the fighting words doctrine in the case and it could be taken up by the U.S. Supreme Court.

The U.S. Supreme Court has not referred to and upheld the fighting words doctrine in decades, Wilson said.

“In the Liebenguth case, his words were reprehensible and offensive, but they were protected speech,” he said, adding that breach of peace requires fighting or violent behavior.

State attorney Mitchell Brody, who represented Connecticut in the Liebenguth case, told Law360 that the fighting words doctrine is not dead in Connecticut and has been used in many state cases.

“The unprotected category of fighting words continues to be litigated in Connecticut, although its governing standards are evolving,” Brody said.

Another case that Pattis is petitioning in the U.S. Supreme Court is the State of Connecticut v. Edward F. Taupier. Taupier was charged under the true threat exception with more than 10 felonies for sending emails to a judge threatening to use violence in his child custody battle with his wife and for posting Facebook comments about killing judges and court employees and burning down courthouses, according to Pattis’ petition.

Pattis argued in his petition that a true threat requires intent and that Taupier didn’t intend to threaten or use violence. But the Connecticut Supreme Court upheld that the true threat exception to the First Amendment doesn’t have an intent requirement. Statements made with reckless disregard can be constituted as true threats, according to the state Supreme Court.

Brody, who also represented Connecticut in the Taupier case, said that statements on the brink of violence are true threats.

“The Connecticut Supreme Court has taken a moderate view of free speech, and its cases reflect the fact that it is very careful in assessing whether speech falls into any particular unprotected category of pure speech, such as fighting words or truth threats,” Brody said.

Wilson said that the state Supreme Court was right that Taupier’s statements met the recklessness exception to free speech, but that the high court needs to provide more guidance to lower courts about free speech exceptions.

“In the context of the rise of social media, the Supreme Court does have a lot of work to do,” Wilson said. “I would like to see them provide much more guidance for state courts on what constitutes a true threat, on defamation and on incitement.”

The third case that Pattis will be petitioning in the U.S. Supreme Court in the coming weeks is a consolidated lawsuit brought by the families of victims in the 2012 shooting at Sandy Hook Elementary School in Newtown, Connecticut, against radio host Alex Jones, who questioned on his show whether the shooting actually happened.

Pattis wants the U.S. Supreme Court to review a Connecticut trial court’s decision not to toss the families’ lawsuit without discovery proceedings and whether Jones can be sanctioned for allegedly threatening the families’ attorney for supposedly planting child pornography into Jones’ emails that were handed over to the attorney during discovery.

Pattis said that the statements that Jones made about the families’ attorney Christopher Mattei are protected speech and don’t constitute true threats.

Wilson said that the Jones case is emotionally charged for Connecticut residents who know the families and victims of the Sandy Hook shooting. The families need to prove Jones knew his statements about the shooting were false or acted negligently when determining whether his statements were true to win their case, he said.

“There’s a strong case to say that [Jones] acted negligently in failing to determine whether his statements were true before making them,” Wilson said.

“To name a few of the many reasons why: it is a unanimous decision, presenting no close First Amendment questions; the sanctions order appealed also rests on a purely state law finding of discovery abuse; and it is an appeal from an interlocutory order, posing a jurisdictional impediment to SCOTUS review,” Sterling said.