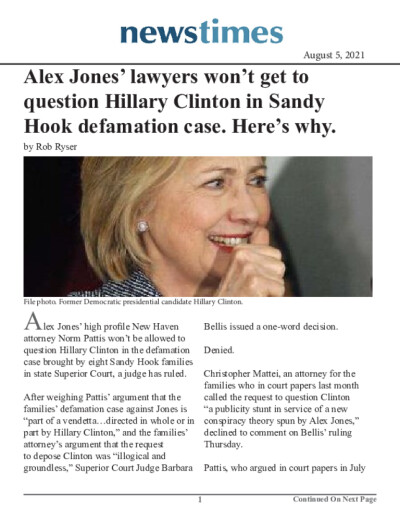 Christopher Mattei, an attorney for the families who in court papers last month called the request to question Clinton “a publicity stunt in service of a new conspiracy theory spun by Alex Jones,” declined to comment on Bellis’ ruling Thursday.

Pattis, who argued in court papers in July that Clinton, the former Secretary of State and presidential candidate, wanted to silence Jones’ “vitriolic criticism” of her after she lost the 2016 presidential race to Donald Trump, said he still wanted to question Clinton after the judge’s denial.

“We’re calling on Hillary to voluntary appear in Connecticut,” Pattis said. “We have questions.”

Clinton did not immediately respond Thursday to requests for comment.

Jones, an extremist who has previously promoted hoaxes on his Texas-based internet broadcast Infowars, is being sued in Connecticut and in Texas for calling the 2012 massacre of 26 first-graders and educators at Sandy Hook School “staged,” “synthetic,” “manufactured,” “a giant hoax,” and “completely fake with actors.”

The Texas cases are separate from the two defamation cases in Connecticut.

Jones through his attorneys says he no longer believes the worst crime in Connecticut history was a hoax, and that the First Amendment gives him the right to be wrong.

In an argument filed on Tuesday in Connecticut- one day before Bellis’ denial - Pattis and fellow Jones attorney Jay Wolman accused the families of singling out Jones among “all ‘Sandy Hook Truthers’” because of Jones’ “role in Mr. Trump’s victory over Mrs. Clinton in the 2016 presidential election.”

“If the true motivation for the instant matter was that the plaintiffs suffered injury as a result of “Sandy Hook Truthers” questioning the narrative produced by the politicization of this tragic shooting, then why are Mr. Jones and related defendants the sole target of the plaintiffs’ fury…?” Jones’ attorneys wrote.

Mattei and lawyers for the families in Connecticut argued in mid July that the request to question Clinton was “frivolous and intended to achieve objectives unrelated to the merits of this litigation.”

“(Clinton) has no relation whatsoever to this case, and her deposition could only be abusive, harassing, and an undue burden - on both Ms. Clinton and the plaintiffs - with no likelihood of producing any admissible evidence,” Mattei wrote.

It’s the latest development in a Connecticut case that’s been in the headlines recently.

In April, the U.S. Supreme Court refused to hear Jones’ appeal of sanctions he received in 2019 after he went on the air with Pattis and was accused of threatening Mattei with a “blood on the streets” rant.

In June, Bellis threatened more sanctions, including a default judgment against Jones, unless his attorneys turned over long-overdue pretrial documents to the families.