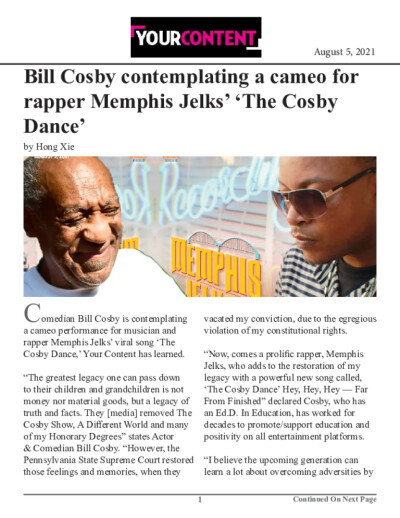 Comedian Bill Cosby is contemplating a cameo performance for musician and rapper Memphis Jelks’ viral song ‘The Cosby Dance,’ Your Content has learned.

“The greatest legacy one can pass down to their children and grandchildren is not money nor material goods, but a legacy of truth and facts. They removed The Cosby Show, A Different World and many of my Honorary Degrees” states Actor & Comedian Bill Cosby. “However, the Pennsylvania State Supreme Court restored those feelings and memories, when they vacated my conviction, due to the egregious violation of my constitutional rights.

“Now, comes a prolific rapper, Memphis Jelks, who adds to the restoration of my legacy with a powerful new song called, ‘The Cosby Dance’ Hey, Hey, Hey — Far From Finished” declared Cosby, who has an Ed.D. In Education, has worked for decades to promote/support education and positivity on all entertainment platforms.

“I believe the upcoming generation can learn a lot about overcoming adversities by studying and applying the principles of Dr. Cosby’s educational and career choices that have helped lead to his enormous success” states Rapper Memphis Jelks. “What better way than a viral song and dance in which the lyrics celebrate some of the great attributes of one of the greatest American comedians of all time, who happens to be Black” emphasized Memphis Jelks.

According to Bill Cosby’s spokesperson and representative, Andrew Wyatt, the comic spoke with the Memphis-based rapper and producer Jelks on Aug. 4 and endorsed the song, “The Cosby Dance,” as well as stated that he would consider making a cameo appearance in Memphis Jelks upcoming video.

Your Content was first to report on Jun. 30 that the Pennsylvania Supreme Court deemed comedian Bill Cosby did not receive a fair trial and ordered his immediate release from prison. What’s more, the state’s highest court barred prosecutors from having any further trials pertaining to the comic icon.

As Your Content readers know, prosecutors tangled in the Bill Cosby trial threw their boss under the bus after admitting under oath to using questionable tactics to secure a conviction—including a groundbreaking claim that the comedian was tricked into a phony immunity deal to self-incriminate himself after giving cops ‘an exculpatory account’ of what happened at his Cheltenham estate with Andrea Constand.

“What will the Commonwealth now pay Cosby for its behavior.” Norm Pattis—America’s most controversial trial attorney told Your Content. “The prosecutors behaved like double-dealing skunks.”