McCaw steps down as budget chief amid federal investigation 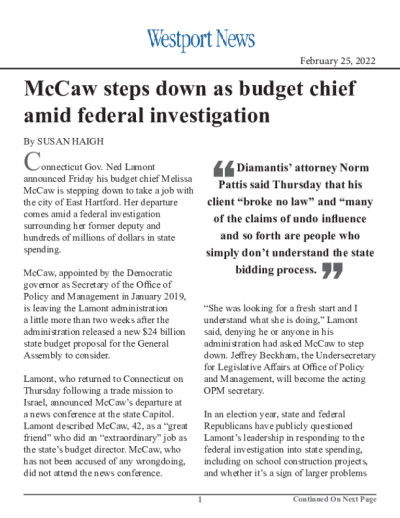 Connecticut Gov. Ned Lamont announced Friday his budget chief Melissa McCaw is stepping down to take a job with the city of East Hartford. Her departure comes amid a federal investigation surrounding her former deputy and hundreds of millions of dollars in state spending.

McCaw, appointed by the Democratic governor as Secretary of the Office of Policy and Management in January 2019, is leaving the Lamont administration a little more than two weeks after the administration released a new $24 billion state budget proposal for the General Assembly to consider.

Lamont, who returned to Connecticut on Thursday following a trade mission to Israel, announced McCaw’s departure at a news conference at the state Capitol. Lamont described McCaw, 42, as a “great friend” who did an “extraordinary” job as the state’s budget director. McCaw, who has not been accused of any wrongdoing, did not attend the news conference.

“She was looking for a fresh start and I understand what she is doing,” Lamont said, denying he or anyone in his administration had asked McCaw to step down. Jeffrey Beckham, the Undersecretary for Legislative Affairs at Office of Policy and Management, will become the acting OPM secretary.

In an election year, state and federal Republicans have publicly questioned Lamont’s leadership in responding to the federal investigation into state spending, including on school construction projects, and whether it’s a sign of larger problems for the administration and state Democrats.

Republican gubernatorial candidate Bob Stefanowski issued a statement saying McCaw’s departure “should not signal an end to the ongoing scandal and investigation,” adding how ”we don’t yet know the full extent of corruption within the Lamont Administration” and that “Connecticut residents have a right to know.”

Lamont insisted Friday that he has acted quickly and decisively.

“I told my team, you participate 100 percent (with the federal investigation). Leave no stone unturned,” he said. “So if I can do one thing to give the taxpayers confidence, when I see something wrong, we aggressively fix it.”

At the news conference, Lamont and officials from the Department of Administrative Services, which is now handling school construction grants, outlined numerous steps the administration is taking to overhaul the school construction financing program and other state contracting practices, after meeting with dozens of communities, legislators, and representatives of the construction industry. The goal, they said, is to ultimately instill confidence that taxpayers’ money is being spent properly.

“There may be some bad habits that accrued over many, many years and we’re getting it right,” said the governor. He noted how his administration is hiring outside auditors to review projects dating back to 2018. That’s in addition to audits being conducted by the Connecticut State Auditors of Public Accounts. Administration officials said efforts are also under way to provide refresher ethics training for state staff including commissioners and other political appointees, and update procurement and contracting policies and procedures.

Since then, there have been various news reports about municipalities feeling pressured by Diamantis to hire certain contractors when school construction grants were handled by OPM. Diamantis’ attorney Norm Pattis said Thursday that his client “broke no law” and “many of the claims of undo influence and so forth are people who simply don’t understand the state bidding process.”

Diamantis submitted a letter of resignation and retirement in October, the same day he was placed on paid administrative leave following an independent investigation ordered by Lamont that questioned the “integrity” of Chief State’s Attorney Richard Colangelo Jr.’s hiring of Diamantis’ daughter. Colangelo, who has denied any wrongdoing, has since announced his plans to retire, effective March 31.

McCaw previously served as budget director for the city of Hartford and the University of Hartford. She also worked as a budget specialist at OPM from 2001 to 2009. McCaw said in a written statement that she was grateful to Lamont for appointing her to the state budget chief job and believes much was accomplished during her tenure, saying Connecticut is now in a “strong fiscal position.” She is expected to begin her new job as the town of East Hartford’s finance director in March.