Alex Jones Reaches Out to Justice Dept. About Jan. 6 Interview 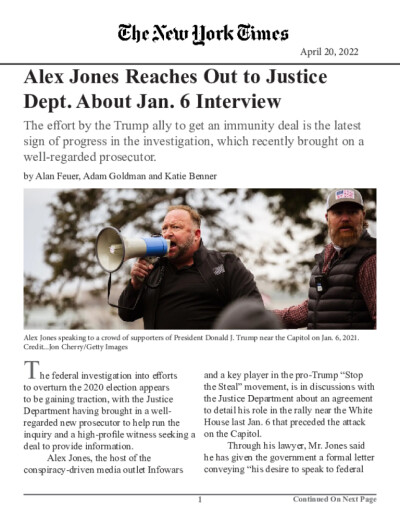 The federal investigation into efforts to overturn the 2020 election appears to be gaining traction, with the Justice Department having brought in a well-regarded new prosecutor to help run the inquiry and a high-profile witness seeking a deal to provide information.

Alex Jones, the host of the conspiracy-driven media outlet Infowars and a key player in the pro-Trump “Stop the Steal” movement, is in discussions with the Justice Department about an agreement to detail his role in the rally near the White House last Jan. 6 that preceded the attack on the Capitol.

Through his lawyer, Mr. Jones said he has given the government a formal letter conveying “his desire to speak to federal prosecutors about Jan. 6.”

The lawyer, Norm Pattis, maintained that Mr. Jones had not engaged in any “criminal wrongdoing” that day when — chanting slogans about 1776 — he helped lead a crowd of Trump supporters in a march to the Capitol as violence was erupting.

As a condition of being interviewed by federal investigators, Mr. Jones, who is known for his rants about the “Deep State” and its supposed control over national affairs, has requested immunity from prosecution.

While convincing federal prosecutors to grant him immunity could be an uphill climb for Mr. Jones, his discussions with the Justice Department suggest that the investigation into the postelection period could be gathering momentum.

Two weeks ago, another prominent Stop the Steal organizer, Ali Alexander, a close associate of Mr. Jones, revealed that he had received a subpoena from a federal grand jury that is seeking information on a broad swath of people — rally planners, members of Congress and others close to former President Donald J. Trump — connected to political events that took place in the run-up to Jan. 6. Mr. Alexander, who marched with Mr. Jones to the Capitol that day, has said that he intends to comply with the subpoena.

Several months ago, the department quietly took another significant step, adding Thomas Windom, a career federal prosecutor from Maryland, to help in the expanded Jan. 6 investigation, according to three people familiar with the matter.

Mr. Windom has been working with officials from the national security and criminal divisions at the Justice Department to determine whether and how to investigate potential criminal activity related to the Jan. 6 attack, other than what took place during the assault.

His work complements two teams led by prosecutors in the Washington U.S. attorney’s office: one focused on charging people for participating in the riot and one focused on more complicated conspiracy cases stemming from it, such as the seditious conspiracy case that was brought against Stewart Rhodes, the leader of the Oath Keepers.

Mr. Windom is looking into the more politically fraught question of whether a case can be made related to other efforts to overturn the election, a task that could move the investigation closer to Mr. Trump and his inner circle. Mr. Alexander’s lawyers have been dealing with Mr. Windom, for example, in responding to the broad subpoena seeking information about the pro-Trump rallies and other efforts to keep Mr. Trump in office.

Those efforts could extend to issues such as the plan by Trump allies to have seven swing states falsely certify that Mr. Trump won, and then mail those false documents to the National Archives and Congress. However, Mr. Windom does not yet have a robust team of prosecutors, leaving unclear how extensive the investigation might become.

Mr. Windom was described by former colleagues as a diligent, aggressive lawyer capable of handling complex investigations. In his former job, Mr. Windom prosecuted some high-profile cases in Maryland — among them those involving domestic and international terrorism, public corruption and national security.

Mr. Windom, for example, helped to secure convictions against a trio of violent members of a white supremacist group called “The Base,” which had hoped to trigger a race war in the United States. Two of the defendants received lengthy prison sentences.

In another case, Mr. Windom prosecuted Christopher Hasson, a white nationalist and lieutenant in the U.S. Coast Guard, who had plotted to kill journalists, Democratic politicians, professors, Supreme Court justices and those he described as “leftists in general.”

Mr. Windom also charged Tawanna P. Gaines, a Maryland lawmaker, with stealing about $22,000 in campaign funds. She pleaded guilty in 2019 and was later sentenced to six months in prison.

“Thomas is a thorough and creative investigator and an experienced trial attorney,” said Robert K. Hur, a former U.S. attorney in Maryland. “He’s calm under pressure and accustomed to building and trying complex, high-stakes cases. Having tried two cases with him, I know his considerable skill before judges and juries.”

If prosecutors ultimately speak with Mr. Jones, they will encounter a polarizing figure with a broad range of ties to people in pro-Trump circles, including some of Mr. Trump’s aides and advisers. Mr. Jones was closely involved in pro-Trump rallies in Washington on Nov. 14 and Dec. 12 in 2020, working with rally organizers, prominent speakers and far-right militant groups like the Oath Keepers, whose members provided security at the gatherings.

One of Mr. Jones’s top lieutenants at Infowars, Owen Shroyer, also was at the forefront of the mob that stormed the Capitol. Mr. Shroyer was arrested in August and is facing federal misdemeanor charges in connection with the riot.

Even if Mr. Jones does speak with prosecutors, there is no guarantee that he will provide useful information. In late January, after appearing in front of the House select committee investigating Jan. 6, Mr. Jones went on Infowars and declared that, on the advice of a lawyer, he had invoked his Fifth Amendment right against self-incrimination “almost 100 times” in front of the committee.

But during the Infowars broadcast, Mr. Jones also revealed that committee investigators had obtained text messages he had exchanged with a political activist, Cindy Chafian, who played a central role in organizing pro-Trump rallies after the election. Ms. Chafian, who was also subpoenaed by the House committee, was among those who had brought in a shadowy paramilitary group called the 1st Amendment Praetorian to serve as event security.

That group, which has ties to Mr. Trump’s former national security adviser, Michael T. Flynn, often worked to provide security at Stop the Steal rallies alongside the Oath Keepers. On Monday, another Oath Keeper charged in the sedition case released a trove of the group’s internal messages showing that its leader, Mr. Rhodes, enjoyed working with the 1st Amendment Praetorian and called protecting Mr. Jones at pro-Trump rallies “a great feather in our cap.”

During his Infowars show, Mr. Jones went on to discuss his relationship with Caroline Wren, a former Trump campaign aide and fund-raising expert who helped arrange Mr. Trump’s speech at the Ellipse. Mr. Jones said that Ms. Wren was among a group of people who led him “to the back of the stage so we could then go and get around the crowd and go lead the march.”

In its letter issuing a subpoena to Mr. Jones, the House committee said that he, Ms. Wren and Ms. Chafian worked with a donor, Julie Fancelli, an heiress to the Publix supermarket fortune, to provide “80 percent of the funding” for Mr. Trump’s rally on the Ellipse. The committee also noted that in the run-up to Jan. 6, Mr. Jones frequently promoted Mr. Trump’s lies about a rigged election and “made statements implying” that he had knowledge of the former president’s plans for his rally.

That day, before Mr. Trump’s speech was finished, Mr. Jones left the Ellipse and marched to the Capitol with Mr. Alexander and Mr. Shroyer, encouraging the crowd around them with a bullhorn. Videos show Mr. Jones shouting chants like, “We’ve only begun to fight” and then receiving word that the building had been breached shortly after 1:30 p.m.

“We got to get this right,” Mr. Jones can be heard telling Mr. Shroyer just before leading the crowd closer to the Capitol. Along the way, the videos show, he led the crowd in chants about “globalists” and declared, “We’re not surrendering.”

The committee has acknowledged that once Mr. Jones reached the Capitol, he told the mob there not to be violent and to gather on the east side of the building, where Mr. Alexander had a permit for a rally, suggesting that Mr. Trump would ultimately meet the group. But Mr. Trump never came to address the crowd and Mr. Jones’s words had the effect of massing crowds on both sides of the Capitol.

The Jan. 6 investigation is only one of the legal troubles Mr. Jones is facing.

On Sunday, three companies affiliated with him, among them Infowars, filed for Chapter 11 protection following his prominent losses in defamation lawsuits in Texas and Connecticut connected to the 2012 Sandy Hook school shooting, which Mr. Jones had claimed was a hoax.