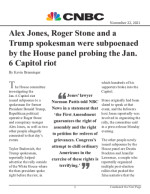 Alex Jones, Roger Stone and a Trump spokesman were subpoenaed by the House panel probing the Jan. 6 Capitol riot

The House committee investigating the Jan. 6 Capitol riot issued subpoenas to a spokesman for former President Donald Trump, Republican political operative Roger Stone and conspiracy monger Alex Jones, as well as two other people allegedly connected to that day’s events
Taylor Budowich, the Trump spokesman, reportedly helped advertise the rally outside of the White House where the then-president spoke right before the riot, in which hundreds of his supporters broke into the...
Read Full Article 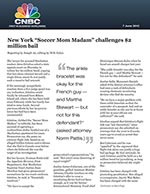 The lawyer for accused Manhattan madam Anna Gristina asked a state appeals court on Thursday to reduce her $2 million bond, arguing that her clean criminal record and a single felony count do not justify such a massive bail amount.
If the seemingly sympathetic reaction from a five-judge panel was any indication, Gristina could finally be released from Rikers Island jail, where she has been held since February while her family has tried to raise funds. Several previous...
Read Full Article
Printed from https://www.pattislawfirm.com/news-clips-media-appearances.php?Source=CNBC