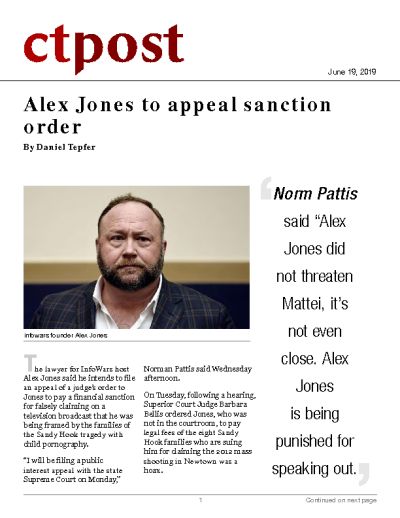 The lawyer for InfoWars host Alex Jones said he intends to file an appeal of a judge’s order to Jones to pay a financial sanction for falsely claiming on a television broadcast that he was being framed by the families of the Sandy Hook tragedy with child pornography.

“I will be filing a public interest appeal with the state Supreme Court on Monday,” Norman Pattis said Wednesday afternoon.

On Tuesday, following a hearing, Superior Court Judge Barbara Bellis ordered Jones, who was not in the courtroom, to pay legal fees of the eight Sandy Hook families who are suing him for claiming the 2012 mass shooting in Newtown was a hoax.

Bloss said the FBI determined that Jones had been sent the child pornography in emails and inadvertently included it in the material he forwarded to them.

“What is not appropriate, what is indefensible, unconscionable, despicable and possibly criminal behavior is to accuse opposing counsel, through a broadcast, no less, of planting child pornography which is a serious felony,” Bellis stated in her decision to levy sanctions. “I reject the Jones’ defendants claim that Alex Jones was enraged.”

But Pattis on Wednesday maintained the judge was wrong.

“Alex Jones did not threaten Mattei, it’s not even close,” Pattis said. “Alex Jones is being punished for speaking out.”