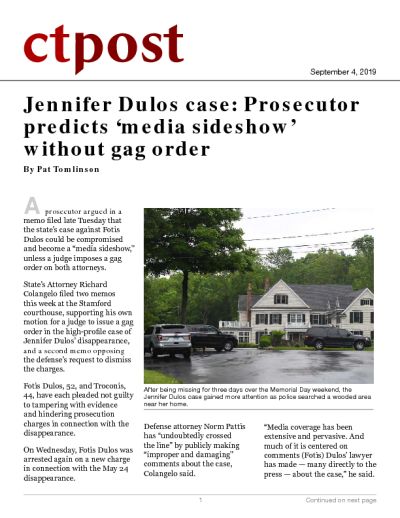 A prosecutor argued in a memo filed late Tuesday that the state’s case against Fotis Dulos could be compromised and become a “media sideshow,” unless a judge imposes a gag order on both attorneys.

State’s Attorney Richard Colangelo filed two memos this week at the Stamford courthouse, supporting his own motion for a judge to issue a gag order in the high-profile case of Jennifer Dulos’ disappearance, and a second memo opposing the defense’s request to dismiss the charges.

Fotis Dulos, 52, and Troconis, 44, have each pleaded not guilty to tampering with evidence and hindering prosecution charges in connection with the disappearance.

On Wednesday, Fotis Dulos was arrested again on a new charge in connection with the May 24 disappearance.

“Media coverage has been extensive and pervasive. And much of it is centered on comments (Fotis) Dulos’ lawyer has made — many directly to the press — about the case,” he said.

Colangelo, who filed a motion last month for the judge to impose a gag order, warned in this week’s memo that Pattis’ statements could prejudice future proceedings in the case.

“An essential tenet of the American justice system is that a criminal trial is not a referendum, and its outcome should never be determined by public-relations campaigns in the court of public opinion. Rather, verdicts must be based on evidence and argument received in court, untainted by outside influence,” Colangelo said.

His memo comes two weeks after Pattis penned an argument against the gag order that claimed Fotis Dulos has the right to respond to “damaging public comments fueled in large part by the warrant filed on existing charges and the sotto voce whispering of tattle-tale officers whispering innuendo to eager reporters.”

Pattis, who has a reputation as an outspoken advocate and legal maverick, has frequently been quoted in the media since joining the case.

Some lawyers and legal experts saw Pattis' strategy as an effort to influence potential jurors and combat the impression, based on filings in the couple’s bitter two-year divorce, that Fotis Dulos was a bullying husband and domineering father who may have killed his wife and disposed of her body.

Pattis has theorized that Jennifer Dulos authored her own disappearance a la the novel “Gone Girl.” Pattis has also suggested that the 50-year-old New Canaan mother might have perpetrated a “revenge suicide” plot. His theories have drawn sharp rebukes from Jennifer Dulos’ family and friends and “Gone Girl” author Gillian Flynn.

In an interview with WPLR’s Chaz and AJ, Pattis also claimed that Troconis passed a polygraph test. However, Colangelo said Troconis has never taken a polygraph.

A second memo filed Tuesday by Colangelo argued against Pattis’ motion from July to dismiss the charges against his client, calling it a “poorly constructed Trojan Horse.”

“The reason for this is simple,” Colangelo said. “By authorizing an arrest warrant, a judge has already determined that sufficient evidence supports prosecuting those charges. No further hearings on the issue are necessary.”

Pattis said Wednesday he had not yet read the memos.

According to arrest warrants, two people resembling Fotis Dulos and Troconis were seen making more than 30 stops in a 4-mile stretch of Albany Avenue in Hartford around the time Jennifer Dulos was reported missing May 24. Videos also showed Fotis Dulos tossing garbage bags that were later found to contain his wife’s blood, police said.

Police said there were signs Jennifer Dulos was the victim of a “serious physical assault” after finding blood stains and spatter in the garage of her home.

Colangelo said Fotis Dulos’ DNA was also found mixed with his wife’s blood on the faucet of her kitchen sink.