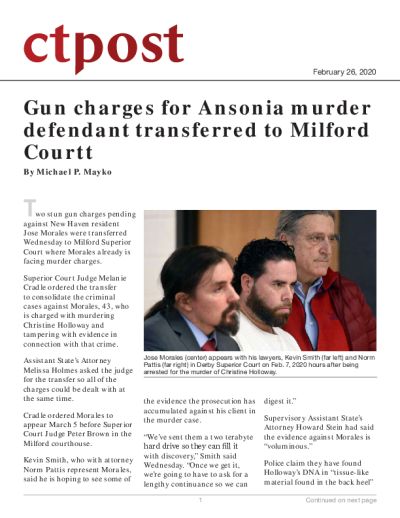 Superior Court Judge Melanie Cradle ordered the transfer to consolidate the criminal cases against Morales, 43, who is charged with murdering Christine Holloway and tampering with evidence in connection with that crime.

Assistant State’s Attorney Melissa Holmes asked the judge for the transfer so all of the charges could be dealt with at the same time.

Kevin Smith, who with attorney Norm Pattis represent Morales, said he is hoping to see some of the evidence the prosecution has accumulated against his client in the murder case.

“We’ve sent them a two terabyte hard drive so they can fill it with discovery,” Smith said Wednesday. “Once we get it, we’re going to have to ask for a lengthy continuance so we can digest it.”

Police claim they have found Holloway’s DNA in “tissue-like material found in the back heel” of Morales’ left sneaker and his DNA in loose hairs found in Holloway’s hands. Holloway was beaten to death in her Ansonia home, where her body was found Dec. 2, 2019. Their 1-year-old daughter, Vanessa, remains missing.

Smith said he is more interested in DNA found in the interior collar of a black T-shirt recovered from a clothes donation bin after Holloway’s murder. DNA from “an unknown third individual” was found on the collar along with that from Holloway and Morales.

Morales has been detained on bond since his arrest Dec. 3, 2019, on two charges of being a convicted felon in possession of stun guns. The guns were found in Morales’ First Avenue bedroom on Dec. 3. At the time, police were searching Morales’ home for evidence that might link him to Holloway’s murder and the missing infant.

Morales has a prior criminal record dating back to 1993 which includes sale of narcotics, violation of protective orders, carrying a pistol without a permit and domestic violence.

The murder charges were added on Feb. 6 and resulted in his bond being raised to $5 million.

Holloway’s badly beaten body was found after police were forced to break into the home after Holloway’s employee and members of her family had repeatedly told them they were unable to get in contact with her after she missed work.

Nobody apparently has seen Vanessa Morales since before her mother’s body was discovered. She was last seen in the company of her parents on Nov. 29.

During one of several interviews with investigators, Morales told police he was coming down from a high after using PCP, a mind-altering drug also known as Angel Dust, when he saw three men rushing toward the front door of Holloway’s home. He said was knocked out after calling 911.