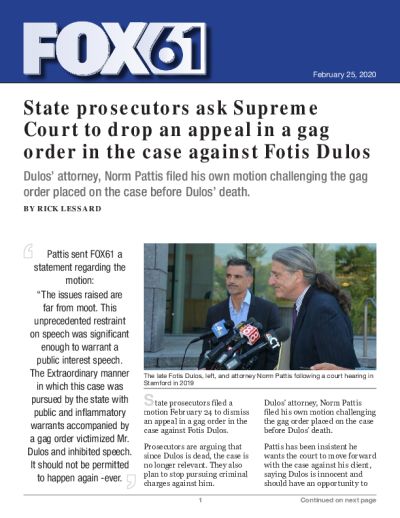 State prosecutors filed a motion February 24 to dismiss an appeal in a gag order in the case against Fotis Dulos.

Prosecutors are arguing that since Dulos is dead, the case is no longer relevant. They also plan to stop pursuing criminal charges against him.

Dulos' attorney, Norm Pattis filed his own motion challenging the gag order placed on the case before Dulos' death.

Pattis has been insistent he wants the court to move forward with the case against his client, saying Dulos is innocent and should have an opportunity to clear his name even in death.

Pattis sent FOX61 a statement regarding the motion:

"The issues raised are far from moot. This unprecedented restraint on speech was significant enough to warrant a public interest speech. The Extraordinary manner in which this case was pursued by the state with public and inflammatory warrants accompanied by a gag order victimized Mr. Dulos and inhibited speech. It should not be permitted to happen again -ever."