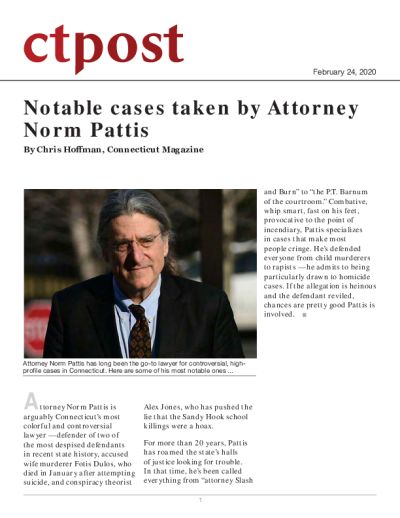 Attorney Norm Pattis is arguably Connecticut’s most colorful and controversial lawyer — defender of two of the most despised defendants in recent state history, accused wife murderer Fotis Dulos, who died in January after attempting suicide, and conspiracy theorist Alex Jones, who has pushed the lie that the Sandy Hook school killings were a hoax.

For more than 20 years, Pattis has roamed the state’s halls of justice looking for trouble. In that time, he’s been called everything from “attorney Slash and Burn” to “the P.T. Barnum of the courtroom.” Combative, whip smart, fast on his feet, provocative to the point of incendiary, Pattis specializes in cases that make most people cringe. He’s defended everyone from child murderers to rapists — he admits to being particularly drawn to homicide cases. If the allegation is heinous and the defendant reviled, chances are pretty good Pattis is involved.