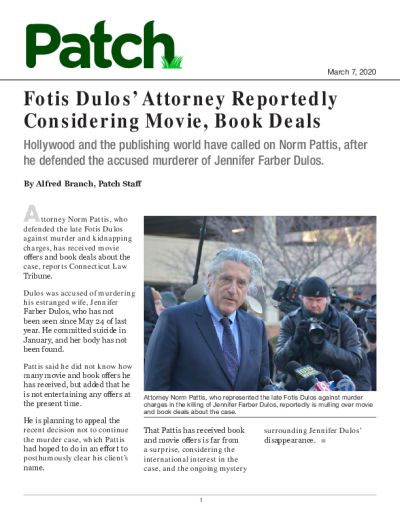 Dulos was accused of murdering his estranged wife, Jennifer Farber Dulos, who has not been seen since May 24 of last year. He committed suicide in January, and her body has not been found.

Pattis said he did not know how many movie and book offers he has received, but added that he is not entertaining any offers at the present time.

He is planning to appeal the recent decision not to continue the murder case, which Pattis had hoped to do in an effort to posthumously clear his client's name.

That Pattis has received book and movie offers is far from a surprise, considering the international interest in the case, and the ongoing mystery surrounding Jennifer Dulos' disappearance.

Both Dr. Oz and Dr. Phil have dedicated episodes of their television shows to the case, and Pattis even floated an unproven "Gone Girl" theory about what might have happened to Jennifer Dulos.

Earlier this week, Pattis said in court that he believes an unnamed third party was responsible for Jennifer Dulos' death, not his client.