Barr's Special Counsel Pick Known For Not Caving To Politics 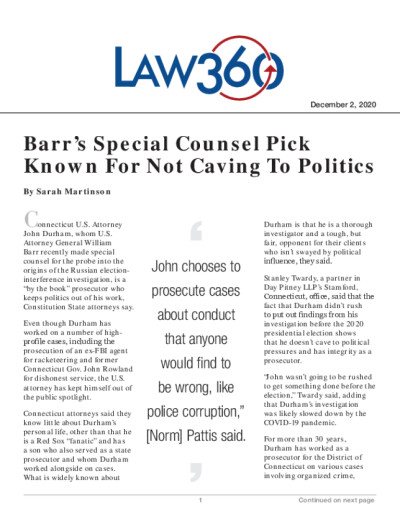 Connecticut U.S. Attorney John Durham, whom U.S. Attorney General William Barr recently made special counsel for the probe into the origins of the Russian election interference investigation, is a “by the book” prosecutor who keeps politics out of his work, Constitution State attorneys say.

Even though Durham has worked on a number of high profile cases, including the prosecution of an ex-FBI agent for racketeering and former Connecticut Gov. John Rowland for dishonest service, the U.S. attorney has kept himself out of the public spotlight.

Connecticut attorneys said they know little about Durham’s personal life, other than that he is a Red Sox “fanatic” and has a son who also served as a state prosecutor and whom Durham worked alongside on cases. What is widely known about Durham is that he is a thorough investigator and a tough, but fair, opponent for their clients who isn’t swayed by political influence, they said.

Stanley Twardy, a partner in Day Pitney LLP’s Stamford, Connecticut, office, said that the fact that Durham didn’t rush to put out findings from his investigation before the 2020 presidential election shows that he doesn’t cave to political pressures and has integrity as a prosecutor.

“John wasn’t going to be rushed to get something done before the election,” Twardy said, adding that Durham’s investigation was likely slowed down by the COVID-19 pandemic.

For more than 30 years, Durham has worked as a prosecutor for the District of Connecticut on various cases involving organized crime, public corruption and financial fraud. In 2017, he served as interim U.S. attorney to replace former U.S. Attorney General Jeff Sessions before Trump nominated him to be U.S. Attorney for the District of Connecticut later that year. Durham was confirmed by the Senate in 2018, according to his U.S. Department of Justice bio.

Barr picked Durham in 2019 to launch an investigation into the origins of the probe into Russian interference in the 2016 presidential election and a possible conspiracy between President Donald Trump’s associates and Russian officials to sway the election in favor of Trump.

Richard Brown, founder of the Glastonbury, Connecticut-based law firm Brown Paindiris & Scott LLP and a white collar defense attorney who has known Durham for more than 20 years, said that Durham will not prosecute defendants unless he has enough evidence to win his cases.

“At the end of the day, in the present investigation, John will do what is right, and he won’t indict someone without sufficient evidence,” Brown said, noting that there is no way his work would be influenced by politics.

The DOJ did not respond to a request for further information about why Barr chose to put Durham in charge of the investigation, and Durham was not available for comment.

Twardy said that Barr may have chosen Durham to lead the investigation in an effort to make the effort nonpartisan.

Durham’s prosecutorial reputation is considered opposite to that of Trump attorney Rudy Giuliani, a former U.S. attorney for the Southern District of New York, according to William Dow, founder of the New Haven, Connecticut-based Jacobs & Dow LLC. Dow, who has defended clients in financial white collar cases against the Connecticut U.S. Attorney’s Office while Durham has been in charge, said Durham doesn’t have Giuliani’s reputation of being politically motivated in prosecutions.

“John practices law as prosecutor by the book,” Dow said, adding that Durham has chosen not to prosecute many cases because he didn’t have sufficient evidence to win those cases.

“John chooses to prosecute cases about conduct that anyone would find to be wrong, like police corruption,” Pattis said.

Pattis said the most interesting case he worked on with Durham, whose nickname is “Bull Durham,” was in a lawsuit against the New Haven Police Department for retaliating against a then-police officer for cooperating with a federal investigation into misconduct by the department.

Durham testified in the case on behalf of Pattis’ client, former New Haven police officer Nicholas Russo, to explain the tension between local and federal law enforcement and why local police would retaliate against an officer for cooperating with the feds, according to Pattis.

Pattis said it is rare to get a DOJ official to testify at trial, but he thought that local police would be reluctant to cooperate with the federal government if the feds didn’t testify in the case. When Durham testified, the trial jury was enwrapped by him and, ultimately, Russo won his case, Pattis said.

“John came prepared and he was in control of his own direct examination,” he said.