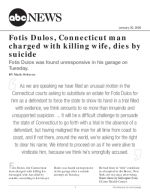 Fotis Dulos was found unresponsive in his garage on Tuesday.

Fotis Dulos, the Connecticut man charged with killing his estranged wife, has died by suicide, according to his lawyer.
Dulos was found unresponsive in his garage after a suicide attempt on Tuesday.
He had been in "dire" condition in a hospital in the Bronx, New York, for two days after being flown there by helicopter from UConn Health Center.
"Fotis Dulos was declared dead tonight at 5:32," his lawyer, Norm Pattis, said at a press conference Thursday. "His family came in from...
Watch Video

The estranged husband of a missing Connecticut mother of five made his first public comments Wednesday since her disappearance, saying he loves and misses his children as they remain in the custody of his mother-in-law while he faces criminal charges.
Fotis Dulos, 51, briefly spoke to reporters after a hearing in his divorce and child custody court case in Stamford.
“I just want to tell my children that they’re constantly on my mind and that I love them and I miss them...
Read Full Article 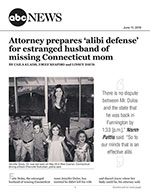 Fotis Dulos, the estranged husband of missing Connecticut mom Jennifer Dulos, has insisted he didn't kill his wife and doesn't know where her body could be, his attorney said.
"This is a troubled couple going through troubled times," Norm Pattis, Fotis Dulos' attorney, told ABC News on Tuesday. "I simply don't know [where Jennifer Dulos is] and he doesn't know either."
"There are troubling questions or good reason for the police to search and conduct their inquiry [into her...
Watch Video

A suburban mother charged with moonlighting as a big-city madam was released from jail on bond Tuesday night, after four months behind bars in a case laced with claims of prominent clients and law-enforcement protectors.
Anna Gristina walked out of a Manhattan courthouse around 9 p.m., free for the first time since her February arrest. She was flanked by her husband and their 9-year-old son, who had arrived with a bouquet of red roses for his mother.
"Thank you, everybody - I just...
Watch Video
Printed from https://www.pattislawfirm.com/news-clips-media-appearances.php?Source=ABC