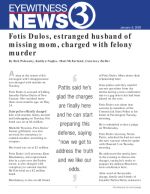 A man at the center of his estranged wife's disappearance was charged with murder on Tuesday.
Fotis Dulos is accused of killing Jennifer Farber Dulos of New Canaan. She vanished more than seven months ago, on May 24.
State police officially charged him with murder, felony murder and kidnapping on Tuesday. His bond was set at $6 million.
Michelle Troconis, Fotis Dulos' former girlfriend, was also arrested for conspiracy to commit murder, according to troopers.
Her bond...
Read Full Article

Kent Mawhinney, a civil attorney for Fotis Dulos, was also charged in connection to the disapperance of Jennifer Dulos.

The estranged husband of a New Canaan woman who vanished several months ago is expected to post his $6 million bond on Thursday.
Fotis Dulos was arrested on Tuesday and charged with murder, felony murder and kidnapping.
In court on Wednesday, a judge kept his bond at $6 million and added house arrest to his terms if he is released from custody.
There was word he'd post bond Wednesday, but his attorney said it will likely happen on Thursday. If that does happen, Fotis will...
Watch Video 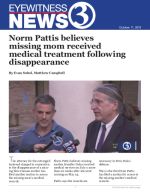 The attorney for the estranged husband charged in connection to the disappearance of a missing New Canaan mother has filed another motion to access the missing mom's medical records.
Norm Pattis believes missing mother Jennifer Dulos received medical services on July 7, more than six weeks after she went missing on May 24.
Pattis says the records are necessary in Fotis Dulos' defense.
In response to Pattis' claims, the spokesperson for Jennifer Dulos' family...
Read Full Article 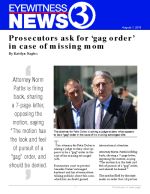 Prosecutors ask for 'gag order' in case of missing mom

The attorney for Fotis Dulos is asking a judge to deny what appears to be a “gag” order in the case of his missing estranged wife.
Prosecutors want to prevent Jennifer Dulos' estranged husband and his attorney from talking publicly about this case, which has no doubt gained international attention.
Attorney Norm Pattis is firing back, sharing a 7-page letter, opposing the motion, saying "The motion has the look and feel of pursuit of a “gag” order, and should...
Read Full Article 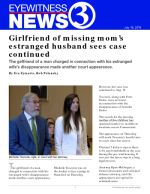 The girlfriend of a man charged in connection with his estranged wife's disappearance made another court appearance.
Michelle Troconis was on the docket to face a judge in Stamford on Thursday.
However, her case was continued to Aug. 19.
Troconis, along with Fotis Dulos, were arrested in connection with the disappearance of Jennifer Dulos.
The search for the missing mother of five children has spanned nearly two months in locations across Connecticut.
The...
Watch Video 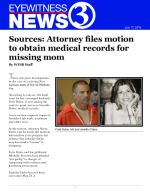 There were new developments in the case of a missing New Canaan mom of five on Wednesday.
According to sources, the legal team for her estranged husband, Fotis Dulos, is now asking the court to grant access to Jennifer Dulos’ medical records.
A new motion requests copies of Jennifer’s lab work, treatment and other tests.
In the motion, Attorney Norm Pattis says he needs the medical information as he prepares his defense that Jennifer Dulos may have had a "reason"...
Read Full Article 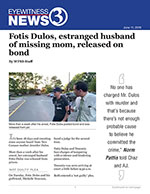 It's been 18 days and counting since anyone heard from New Canaan mother Jennifer Dulos.
More than a week after his arrest, her estranged husband Fotis Dulos was released from prison.
'Not Guilty' Plea On Tuesday, Fotis Dulos and his girlfriend, Michelle Troconis, faced a judge for the second time.
Fotis Dulos and Troconis face charges of tampering with evidence and hindering prosecution.
Troconis was seen arriving at court a little before 9:30...
Watch Video

On Tuesday, Michelle Troconis and Fotis Dulos both entered a not guilty plea.